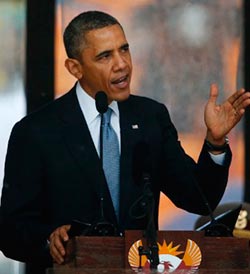 BARACK Obama is to venture into the Alaskan wilderness with British adventurer Bear Grylls for a television programme exploring the impact climate change is having on the environment.
The US president arrived in the state on Monday and will team up with the television presenter for a crash course in survival techniques during his three-day trip.
The special edition of Running Wild With Bear Grylls will be broadcast later this year, NBC said.
In a statement the television network said: “President Obama will meet with Grylls while visiting Alaska to observe the effects of climate change on the area. The two will then come together in the Alaskan Wilderness.
“President Obama will become the first US president to receive a crash course in survival techniques from Bear Grylls. The visit will be taped and aired on NBC later this year.”
Located at America’s extreme north-western tip, Alaska is known for its icy terrain, mountains and freezing temperatures, which plummet to as low as minus 62C.
Brown and black bears roam the state while polar bears are found along its coast.
During the trip he will address a US-sponsored summit on climate change and the Arctic, hike a glacier and meet local fishermen.
Eton-educated Grylls, who has served with the SAS and wrestled sharks and alligators, has taken a string of celebrities on one-on-one adventures to test their survival skills on the series.
So far, actresses Kate Winslet and Kate Hudson and Magic Mike star Channing Tatum have all taken part in the show.
Obama recently pledged to lead the world’s efforts in tackling climate change and announced plans to slash US carbon emissions.
Grylls posted a link to a video of Obama’s weekly address in which he laid out his plans to visit Alaska to assess the impact greenhouse gases are having on the environment.
In it, the president said many Alaskans work as fishermen and are already living with the effects of climate change.
And he warned four villages are “in imminent danger” and have to be relocated, while rising sea levels are beginning to swallow one island community.
Obama told Americans: “Think about that. If another country threatened to wipe out an American town we would do everything in our power to protect ourselves. Climate change poses the same threat right now.”Advertisement