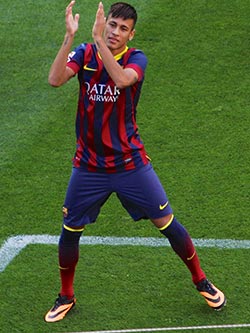 BARCELONA have paid 13.5 million euros (£11.7m) to the Spanish authorities after they were charged last week with tax fraud in the signing of Brazil forward Neymar, the club said on Monday.
The Spanish champions insisted they had not committed any tax offence and said the payment had been made due to a “possible difference of interpretation” about the amount they owed after signing Neymar from Santos in the close season.
The exact amount paid on Monday was 13,550,830.56 euros, Barca said in a statement on their website.
“The aim is to cover eventual interpretations that could be given to the contracts drawn up in the operation to sign Neymar,” they said.
It was not immediately clear whether the payment would mean the fraud charges laid by a Madrid court would be dropped.
Barcelona were forced on the defensive over the Neymar deal after a club member filed a complaint against President Sandro Rosell alleging misappropriation of funds.
Rosell, who denied wrongdoing, stepped down saying he wanted to clear his name and protect the club’s image. But when details of Neymar’s signing came to light the judge overseeing the case granted the prosecutor’s request to lay charges for tax fraud.
After Rosell’s exit, Barca admitted he had cost 86.2 million euros (£73.2m), including payments to the player and his family, and not 57.1 million (£47.19) as they originally said.
The judge has requested Barca’s tax records relating to the deal and had asked the tax authority to calculate the scale of the alleged fraud.Advertisement