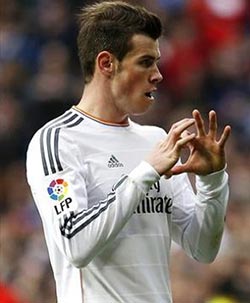 BARCELONA were shocked 3-1 by Real Sociedad to slip behind in the La Liga title race, while Real Madrid beat Elche 3-0.
Alex Song’s own goal was cancelled out in the 36th minute by Lionel Messi, who slotted the Catalans level before the break.
However, as Barca coach Tata Martino was sent off during half-time, Socieded came out of the blocks quickly in the second half and struck twice in five minutes through Antoine Griezmann and David Zurutuza.
Barcelona huffed and puffed but were lucky not to concede another as they slipped up and fell three points behind their rivals.
Gareth Bale scored an outstanding long-range goal as Real Madrid beat Elche 3-0 at the Bernabeu to go top of the table.
The world’s most expensive player added to Asier Illaramendi’s first-half opener with a stunning strike on 71 minutes, and then substitute Isco hit a third with 10 minutes remaining.
In the absence of the suspended Luka Modric, Madrid struggled to control the game in the opening half an hour but, although Madrid never hit top gear, they pulled off their 10th home win of the season and took advantage of Barcelona’s slip to stay top.Advertisement