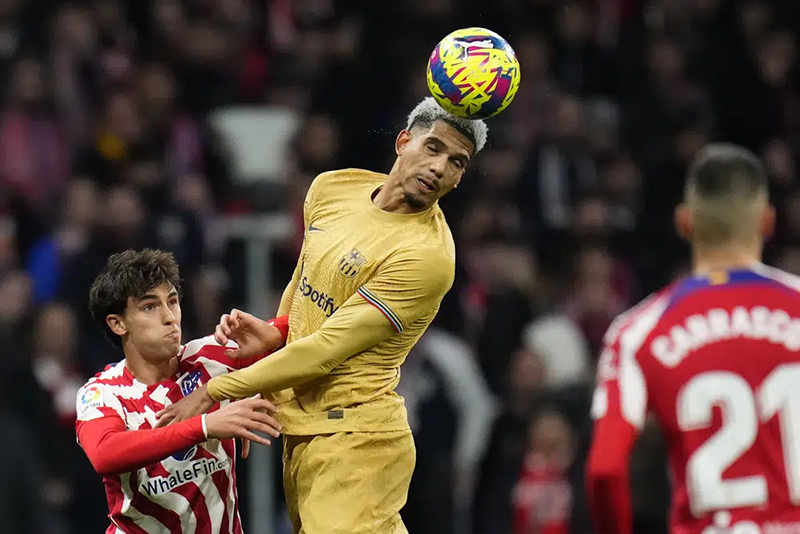 MADRID: Playing without Robert Lewandowski wasn’t so bad for Barcelona after all.

Barcelona overcame the absence of its top striker to win 1-0 at Atlético Madrid and open a three-point lead over rival Real Madrid in the Spanish league on Sunday.

Madrid had lost 2-1 at Villarreal on Saturday for its second league loss of the season. Atlético dropped to fifth place, seeing its gap to the lead reach 14 points.

“We made a statement,” Barcelona coach Xavi said. “We showed that we are true title candidates.”

Ousmane Dembélé scored in the first half and Barcelona held on for its first league win of the year. Dembélé scored with a low shot from close range after a set up by Gavi Páez in the 22nd minute.

“We knew it was going to be tough to win here, but after Madrid lost points against Villarreal we had to take advantage of the opportunity,” Barcelona captain Sergio Busquets said. “We have to keep adding points at the top.”

Barcelona was without Lewandowski, the league’s leading scorer with 13 goals, because the Poland striker began serving a three-game suspension from before the World Cup break. He had faced Espanyol late last year after the suspension was temporarily lifted, but it got reinstated this week to keep him from playing.

Xavi started with Ansu Fati in Lewandowski’s position. Fati had come off the bench to score the winning goal in extra time and help Barcelona escape elimination against third-division club Intercity in the Copa del Rey midweek.

“It was important to win without Robert, who is a key player for us,” Xavi said.

Forward Antoine Griezmann had a couple of good opportunities to equalise for Atlético but couldn’t capitalise on them at the Metropolitano stadium in the Spanish capital. His best came in stoppage time with a shot that Barcelona defender Ronald Araújo cleared just in front of the goal line.

“We played well for most of the match,” Atlético goalkeeper Jan Oblak said. “We created chances but we were a bit unlucky. We could have scored a few times, but the ball just didn’t go in.”

Atlético defender Stefan Savic and Barcelona forward Ferran Torres were sent off in stoppage time after getting into an altercation with each other.

It was Barcelona’s first league win at Atlético since 2019.

Barcelona will now travel to Saudi Arabia to play in the Spanish Super Cup along with Madrid, Real Betis and Valencia. The Catalan club takes on defending Copa del Rey champion Betis on Thursday in one of the semifinals. Madrid and Valencia play in the other semifinal on Wednesday.