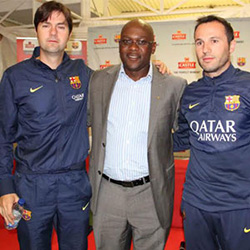 TWO FC Barcelona academy coaches Daniel Bigas Alsina and Isaac Oriol Guerrero Hernandez conducted their first coaching workshop with PSL coaches and captains on Monday and are expected to wind up their sessions of Tuesday.
The two from the famous Barcelona football school, the La Masia which has churned out the likes of world star Lionel Messi, Pep Guardiola, Carles Puyol, Andres Iniesta, Xavi Hernandez, Cesc Fabrigas, Sergio Busquets, Mikel Arteta and Pedro.
The two Barca coaches are in Zimbabwe courtesy of a partnership between Barcelona and Castle.
Alsina said they have at times been criticised of the Barcelona tiki-taka philosophy which stresses one-touch and possession football but will always stick to it.
“We are happy to be here in Zimbabwe. It gives us pleasure to have the opportunity to teach others in this world about our football philosophy at Barcelona. Others have not yet appreciated our type of football but we will always be loyal to it. There results of this type of play are there to see,” Alsina said.
One of the presentations made by the coaches was a half-time team talk of Guardiola in a 2011 Uefa Champions League match against Shakhtar Donetsk where the fomer Barca coach emphasised the need to stick to tiki-taka philosophy.
Former Warriors coach Klaus-Dieter Pagels had introduced the tiki-taka brand of football into the Warriors before the coming in of Ian Gorowa saw it dumped.
FC Platinum coach Lloyd Mutasa is a renowned believer of one-touch football.Advertisement