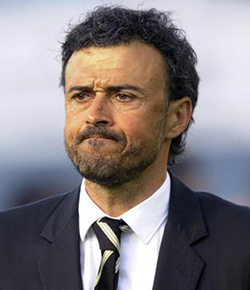 FORMER Barcelona skipper Luis Enrique has returned to the club as their new manager, the Liga club have confirmed.
The 44-year-old, who led Celta Vigo this season, has agreed a two-year deal to take over from Gerardo Martino, who left his position after just one campaign in charge.
The Catalan club said in a statement on their official website: “The FC Barcelona board of directors have this evening confirmed Luis Enrique Martineza as the new first-team coach, following a proposal from sporting director Andoni Zubizarreta. Luis Enrique, 44, will sign a two-year deal.”
The appointment of the former Spain international, who played at the Nou Camp from 1996 to 2004 after joining from bitter rivals Real Madrid, came on a busy day for Barcelona.
Lionel Messi put pen to paper on his new deal, while the club also completed the signing of highly-rated German goalkeeper Marc-Andre Ter Stegen from Borussia Monchengladbach and announced forward Gerard Deulofeu would return to the club from his loan spell at Everton.
The trio will play under Luis Enrique next term, with the new boss tasked with bringing silverware back to Catalonia.
The club missed out in the league, cup and Champions League under Martino, finishing second to Atletico Madrid on the final day of the Primera Division.
Atletico also knocked Barca out of the Champions League in the quarter-finals, while Real beat them in the Copa del Rey final.
Luis Enrique won two La Liga titles, Copa del Reys and the Cup Winners’ Cup during his eight years as a player at the Nou Camp, also captaining the side.
He started his managerial career with the B team before moving on to Roma, spending just a single season in the Italian capital.
His return to Barca as first-team boss sees him follow in the footsteps of Pep Guardiola as the only man to be the club’s captain, B team coach and first-team manager.
Luis Enrique, who started his playing career at Sporting Gijon before a five-year stint at the Bernabeu, had limited success at Roma, finishing in seventh place in Serie A.
His work at Celta, following a year out, is what has caught the eye of Zubizarreta and the Barca board. He guided them to a ninth-placed finish this term.Advertisement