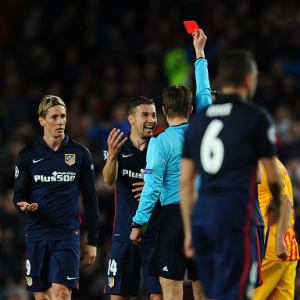 FERNANDO Torres raged that Atletico Madrid are not treated equally to Barcelona by referees after his early red card turned their Champions League quarterfinal, first leg around on Tuesday.
Torres had put Atletico in front at the Camp Nou before seeing two quick-fire yellow cards to leave the visitors a man light for over an hour.
Luis Suarez finally converted Barca’s relentless second-half pressure into a 2-1 lead as he struck twice in 12 minutes.
However, Atletico were enraged as unlike Torres, Suarez escaped punishment for a kick out at Juanfran and an off-the-ball incident with Filipe Luis.
“They shouldn’t have been cards. If it had been the other way around then they wouldn’t have been given,” Torres told Spanish radio station Cadena Cope.
“With 11 (men) we would have won without any doubt.”
And the former Liverpool and Chelsea striker claimed Uefa have their priorities wrong after making both sides play in their away kits to avoid a colour clash.
“Uefa worry about making us change shirts, but they didn’t appoint a referee that is up to the level of the Champions League quarterfinals.”
Luis went even further by implying Uefa are scared of Barcelona not reaching the final.
“I don’t know what Barca players have to do to get sent off just like us,” Luis told Spanish TV station MEGA.
“You can tell there is fear that Barca will be eliminated.”
Atletico’s players’ choice of words could prove costly should Uefa feel the need to impose bans on those that have launched attacks on German referee Felix Brych.
Coach Diego Simeone was more measured in his criticism and was happy to escape Catalonia with the tie still in the balance.
“There were more than two incidents involving Suarez,” said Atletico boss Diego Simeone.
“I can’t say what I think, but I am not angry with Fernando (Torres) for sure.”
“We had a great first-half, in the second we tried to limit the damage as much as possible for the game that is still to come.”
Barca boss Luis Enrique was understandably less sympathetic towards Torres. “Both of Torres’s two yellow cards are clear,” he said.
“They may have been unintentional, but they are clear.”
Barca saw a 39-game unbeaten run come to an end with defeat to Real Madrid and their bid to become the first side to retain the Champions League looked under serious threat before Torres’s dismissal changed the course of the game.Advertisement

However, Enrique dismissed suggestions his side are beginning to pay physically for the demands of playing in six competitions this season.
“Watching the second half there is no physical problem,” he added.
“We played with enthusiasm, but also a cool head because if you only play with the heart it is dangerous.
“I think we did enough to have won by one more goal.”