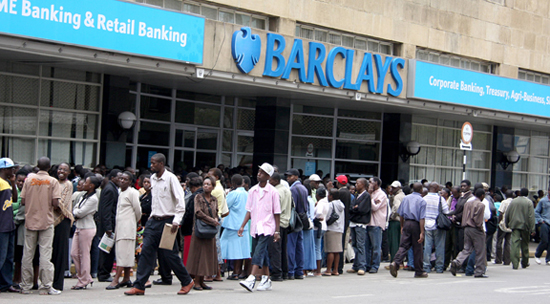 BARCLAYS Africa Group Ltd., the South African lender controlled by Barclays Plc, said it’s in talks with its parent company to buy the British bank’s operations in Egypt and Zimbabwe.
“We’re keen to acquire them, but it has to be done at a competitive price and be value accretive and that’s the process we’re in with Plc,” Maria Ramos, chief executive officer of the Johannesburg-based lender, said on a conference call Tuesday. “Our core priority is to extract value from our existing portfolio.”
After buying its parent company’s operations in eight countries on the continent in 2013 in an all-share deal, Barclays Africa has been standardizing technology across the continent and rolling out its investment banking products. The lender, which lost domestic market share in consumer banking to rivals like FirstRand Ltd., has also been developing products and strategies to lure more customers in its home market.
Net income for 2014 climbed to 13.2 billion rand ($1.13 billion) from 12 billion a year earlier, Barclays Africa said in a statement earlier, as it loaned more money to customers and investments grew.
Earnings per share excluding one-time items climbed to 15.38 rand, missing the 15.44 rand median estimate of 14 analysts surveyed by Bloomberg. The total dividend rose 13 percent to 9.25 rand per share.
While Barclays Africa expects further expansion in loans in South Africa this year, interest rates that are likely to remain low will curb improvements in its net interest margin, the bank said in its statement.
“Focus on revenue growth and continued cost management should improve the group’s cost-to-income ratio, while its credit loss ratio has probably troughed. These factors should increase our return on equity in 2015.”Advertisement