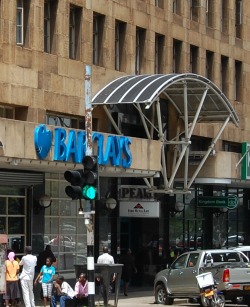 BARCLAYS Bank Zimbabwe is embroiled in a bitter wage dispute with the bank workers union, which has demanded that the bank raise wages for its employees or risk labour action.
The country’s banking sector has been hit by rising utility and employment costs as financial institutions battle a crippling brain drain that has seen qualified workers ditch local companies for greener pastures beyond the country’s borders.
Foreign-owned banks are also operating against the backdrop of a looming indigenisation drive that requires them to cede majority shares to black Zimbabwean groups.
Moreover, the banks are facing increased competition from Econet’s EcoCash mobile money transfer platform, which has incorporated most of the traditional roles and services offered by banks.
It is understood that the union is demanding a 35% salary increase for employees, while management is said to have offered a 3.75% increase.
In August last year employees were awarded a 10% salary increase that took the wage for the lowest-paid bank worker to about $600 a month.
Any industrial action against Barclays is likely to further compound woes currently bedevilling the sector.
However, the Bankers Association of Zimbabwe said Friday that the minimum wage for the banking industry was $604.14, adding that this was “in line with the poverty datum line” of about $512.00.
The association admitted that it had reached a deadlock in salary negotiations with employees’ representative groups. This has since been referred for arbitration, it said.
The Zimbabwe Banks and Allied Workers Union this week staged a demonstration against Barclays Zimbabwe at the bank’s head office in Harare.
The union has also given notice that it will picket the bank — a process under which bank workers other those employed by the bank concerned stage demonstrations.
“The demonstration is a result of Barclays’ unwillingness to comply with our demands. We are saying Barclays is being unfair to its workers because it’s not negotiating in good faith. The management has remained very arrogant and do not want to negotiate with us,” union president Farai Katsande said.
The bankers’ representative grouping said the bank employees’ union had jumped the gun as the arbitration process for the case — following the deadlock in salary negotiations for the 2013 cycle — was still pending conclusion.Advertisement

Similar demonstrations have already been staged against another commercial bank, NMB Bank, and it is expected that wage negotiation deadlocks with other banks could further strain relations between banks and employees in the financial services sector.