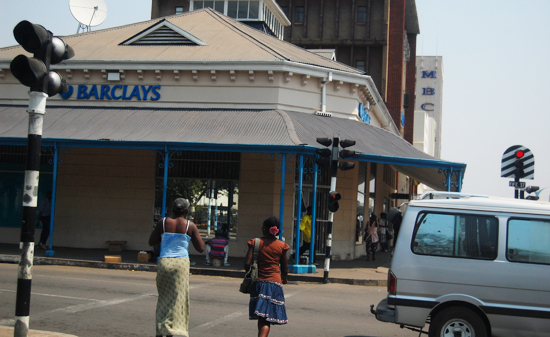 THE latest half year results are not the best that Barclays has produced in recent years, but they provide the comfort that the bank is still on a solid path. Coupled with FY2014 sterling results, we can explain the 69.4 percent share price rally since the start of the year.
In the same period the banks’ index (an aggreagate of the five banks) was only up by 8.2 percent while the industrial index was down 18.8 percent. Year on year, Barclays has also risen by 23.4 percent. It was Barclays that helped the index to post a positive return in September as all other banks dropped in prices.
Growth
Half year total income surged by four percent to $21,7million.  Total income is made up of interest income and other non-interest income. In an environment where loan defaults have been a cause for panic, it was pleasing to see interest income going up by seven percent.  To an extent the rise in interest income may be partly attributed a jump in loans and advances to customers from $111 million to $125 million.
Non-interest income which comprises ledger fees, cash withdrawal fees, commission fees and forex dealings was 1.7 percent short of HY2014 performance.  Cash withdrawal fees mirrored pressure on household incomes and rising unemployment. Fees for the first of 2015 were down 14.8 percent to $2,67 million. The trend is likely to persist as job and salary cuts take the toll.
While total income was up four percent, net profit suffered a 25 percent decline to $10,3million. The drop in profitability was largely the result of a rise in staff costs from $10,3million to $11,1million for the first half of 2015. As a result, cost to income ratio rose from 88 percent to 90 percent.
Quality
HY2015 results indicate that Barclays has been rebalancing its loan portfolio from risky agriculture related exposure to relatively safer trade and services. Trade and services exposure increased from eight percent to 17 percent of total loan book. In the same period Agriculture exposure has been reduced from 14 percent to 9 percent of total loan book. Impairments under the Trade and services loan book were 0.9 percent suggesting a relatively safe sector.  Agriculture related loan impairments were 16.7 percent of the loan book.  We interpret the shift from agriculture to trade and services as a way to reduce risk exposure to defaults.  Overall, provision for impairments as a percentage of total income is at the lowest at 3.2 percent down from 5.3 percent first half of 2014.Advertisement

Operational margin was 11.9 percent HY2015 from 9.6 percent HY2014. Net profit fell from 8.3 percent to 6 percent.
Valuation
Current valuation of Barclays is a reflection of a flight to safety. Investors would rather park their capital in stable and conservative companies such as Barclays even though valuations are looking fully priced. The bank is trading at fair multiples. Trailing P/E ratio is 13.7 and price to book is at 2.1. Half year 2015 results indicate earnings will be significantly lower than 2014’s. We are forecasting a 30 percent drop in FY2015 results suggesting a forward P/E of 20.  Still we think this will be fair as Barclays has traded at steeper multiples before.
The writer is an analyst at Emergent Research.