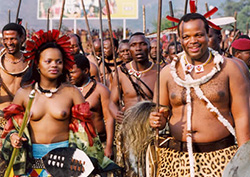 A BULAWAYO photographer and author, Crispen Ndlovu, has lined up a series of art exhibitions as he embarks on a journey to retrace African roots.
Ndlovu is currently working on a ‘bare breasts photography exhibition” which he expects to showcase at the Bulawayo Art Gallery from October 1 to 12.
While Ndlovu believes this exhibition is meant to celebrate African culture, it might not go down well with certain sections of the society who might view it as enforcing patriarchy.
In an interview with NewZimbabwe.com, Ndlovu defended his proposed exhibition saying European civilisation has brainwashed Africans.
“The motivation behind the exhibition is to retrace our roots as Africans. In the African context there is nothing wrong with going bare-breasted. We are now being limited by European civilisation.
“If you look at breast cancer, it is killing more women in Africa than anywhere else because we have been conditioned not to talk about certain body parts which are now being treated as sacred,” said Ndlovu.
Ndlovu opined that long before colonialism, African women walked around bare-breasted and breasts were a symbol of life.
“Breastfeeding was more prevalent in Africa than in Europe. In Europe during the same period women there had nurses who would breastfeed their children for them.
“Now African women are no longer keen on breastfeeding because they do not want their breasts to collapse,” he said.
Ndlovu said those who were berating Swaziland’s King Mswati III for parading semi-naked virgin girls during the annual reed dance, where he hand picks a new wife, were being insincere.
“As Africans there are certain things that are in our culture which we should uphold. Right now people are condemning King Mswati for parading those semi-naked girls but in America there are strip clubs, in Brazil there is the carnival, who condemns them?” asked Ndlovu.
He says he hopes his exhibition will provoke people to think deeply about cultural values that are fast being eroded as society embraces western cultures and influences.
The exhibition has already received support from certain organisations that want to use the platform to push for breast cancer awareness.
October is known worldwide as the breast cancer month, where awareness is raised on the need for early detection.Advertisement

Ndlovu revealed that he has received overwhelming responses from women in the city who want to be part of the exhibition.
If all goes well, Ndlovu hopes to take the same exhibition to Harare before the end of the year.