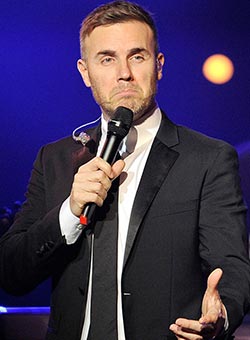 GARY Barlow has told for the first time how the stillbirth of his daughter filtered into the songwriting on his latest album.
In a new BBC documentary, the chart star told how the title track Let Me Go was fuelled by the heartbreak as well as by the death of his father.
He suggests to interviewer James Corden that he is channelling the people he has lost and using “someone else’s” voice.
Gary and his wife Dawn were devastated when their fourth child Poppy was delivered stillborn in August 2012, three years after his father Colin died.
In the new film, When Corden Met Barlow, he explained he was pleased to be able to create a song which was celebratory and which his fans might consider on the face of it to be upbeat.
James tells Gary he concluded from listening to the song that it was written by his stillborn child.
Gary explains: “From that thing happening, to my dad’s passing, there’s a lot of them in this record with me.
“I wanted it to be a celebratory record because that’s where we’re at in our lives with the whole thing that happened. And it makes me really happy when I see people going crazy to that song.
“It really is, because it should be a celebration, that song, because in some respects it’s alive, that record, and those lyrics and what it relates to.
“It keeps a life and a flame in the whole thing. And I love it, I love that it has got two elements to it – I love that on one hand you think, ‘this is just the most fun ever I’ve had’ to this record; and then when you start going beneath that, you really, you see what it’s saying. It’s not my voice, it’s someone else’s.”
Gary Barlow – Let Me Go