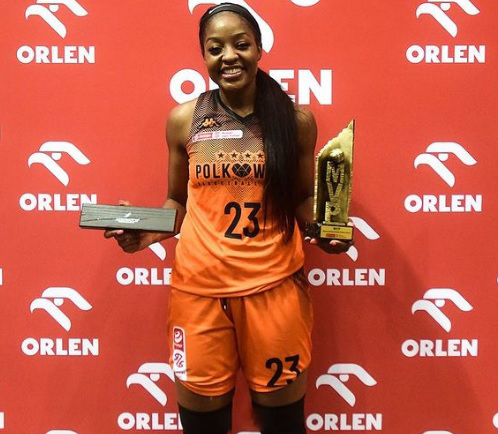 Zimbabwe-born American basketball star Stephanie Mavunga has been crowned EuroLeague Women MVP for the month of December after an impressive spell at Polish side BC Polkowice.

The EuroLeague Women is the top inter-club competition in women’s club basketball in Europe.

Mavunga, the 24-year-old forward, who was born in Harare and bred in the USA, takes the accolade in the competition after producing some excellent performances during the period, all of which carried her team to a perfect three wins from their three outings.

First up in the month, Mavunga propelled Polkowice to an absorbing 76-73 win at home to Valencia Basket Club, finishing the contest with a powerful double-double of 18 points and 13 rebounds.

There was also a second nerve-wrecking 63-62 success at Tango Bourges Basket when she posted a powerful and pivotal defensive effort. That returned 9 points, 12 rebounds, 4 steals and a block.

Polkowice then signed off 2022 in style as they moved to 6-1 at the top of Group A, with a one-sided 89-56 triumph at home to Atomeromu KSC Szekszard.

The Zimbabwe-born star’s recent success comes after she was selected at the MVP in the Polish League after guiding her club to the championship last season.

The former Ohio State University Star, who also had stints in the WNBA with Indiana Fever, Chicago Sky and Washington Mystics stood out with her dominance around the basket both in attack and defence in addition to her accurate shooting from distance.

After representing the USA at junior level Mavunga is in the process of switching her international allegiance to Poland and enjoyed a successful debut for the central European nation as they won the Peristeri International Tournament in Greece in June.

Mavunga hails from a basketball family. Her elder brother Julian has played professionally in Italy, Ukraine (2013-2014), Israel, Kosovo and Japan, where he has been playing for the past seven seasons.

The youngest of the Mavunga siblings, Jordache, also recently moved to Japan after a successful collegiate career in the US with the University of Indianapolis team.

Stephanie, however, has been the most successful in the family. Four years ago she made history when she became the first Zimbabwean-born player to be drafted into the WNBA.

Prior to moving to Poland she also had successful stints in Europe with Russian sides Enisey Krasnoyarsk and Dynamo Kursk and in France with Basket Lattes Montpellier Agglomération.