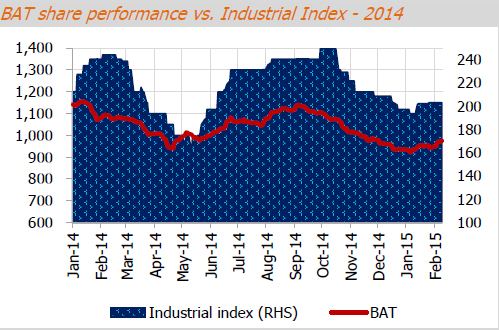 CIGARETTE maker British American Tobacco has reported a $13,4 million after tax profit for the full-year to December from $3,7 million registered in prior year.
This was after the company made a once-off payment in compliance with the country’s indigenisation and empowerment regulations.
Revenues were flat on $44,5 million despite a four percent growth in volumes.
A non-recurring payment of $10,9 million in 2013 towards the company’s employee share ownership trust saw earnings improving during the period under review despite a slight increase in cost of sales.
Finance director Peter Doona said gross profit reduction was offset by a reduction in marketing and sales costs.
He said following this payment, the company had fully complied with the regulations compelling foreign owned firms to dispose of at 51 percent stakes to locals.
Going forward, managing director Lovemore Manatsa said the company would adopt pricing models that improve demand following last year’s increase in excise duty, which he said had resulted in sluggish volumes in January.
“Trading conditions are expected to remain challenging going into 2015 as the country continues to look for economic growth and stability,” company chairman Kennedy Mandevhani said in a statement accompanying the financials.Advertisement