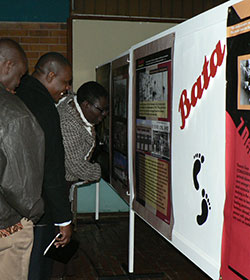 BATA workers on Friday downed tools to pressure the shoe manufacturer to review their housing and transport allowances.
Last month the employees embarked on daily tea break protests with committee spokesperson, Edias Bhasikiti, saying workers would do so until their demands are met.
“Our protests will be peaceful and would be carried out during tea breaks until management addresses our demands for an increase in housing and transport allowances,” Bhasikiti said then.
The workers want the $11 for transport and housing allowance to be doubled for the lowest grade.
But, according to workers, the firm has not honoured their demands hence the reason to go on a full-fledged strike.
Bata managing director, Roy Sengupta was not available for comment but in a letter addressed to the Ministy of Public Service, Labour and Social Welfare, the workers accused Sengupta of failing to engage employees for a works council meeting.
“For the past seven or eight months there has not been any works council meetings,” reads part of the letter.
“For reasons better known to himself, Sengupta failed to adhere to the laws of the land, thereby denying us, as workers committee representing more than 1 000 employees, our constitutional rights.”Advertisement