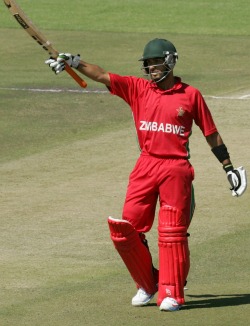 ZIMBABWE batsman Sikandar Raza has been fined 15 per cent of his match fee for breaching the ICC Code of Conduct during the first one-day international against Bangladesh on Saturday.
Match referee Javagal Srinath imposed the penalty after the player showed dissent with an umpire’s decision.
After being given out caught behind, Raza delayed leaving the wicket, shaking his head and saying something that was deemed to be contrary to the spirit of the game.
Zimbabwe lost the match by 145 runs.
The charge was levelled by on-field umpires Aleem Dar and Sharfuddoula, third umpire Enamul Haque, and fourth umpire Anisur Rahman.
The second one-day International between the two sides is on Monday.Advertisement