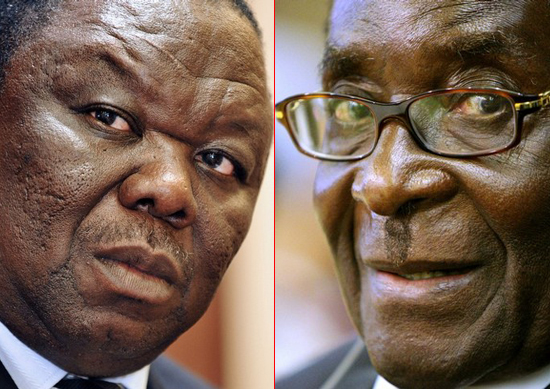 THE electoral campaign launches by two of Zimbabwe’s biggest political parties, Zanu PF and MDC-T means the battle lines have now been drawn for what is going to be one of the fiercely contested polls in the history of Zimbabwe.
For anyone who keenly followed the parties’ respective launches, it appears that the Zanu PF’s Robert Mugabe, right from the word go, has already turned the corner ahead of bitter rival MDC-T’s Morgan Tsvangirai. Far from presenting a languid figure with one foot in the grave, Zanu PF presented a sprightly Mugabe, who for close to one and a half hours rallied his cadres to carry out a “real, real forceful, vigorous, devastating fight”.
On the contrary the MDC-T presented a bullied Tsvangirai whose message of carrying a “heavy heart” sounded to be more of an appeal to the sympathies and benevolence of the electorate rather than telling them what he has on offer. Tsvangirai unlike Mugabe seems to have all but surrendered his fate to divinity.
While for most people it is still early days to predict the outcomes of Zimbabwe’s polls based on the two top candidates’ performances at their respective ‘campaign launches’, the performances provide telltale signs of the results that Zimbabwe has to expect after the closure of polling booths on July 31.
Until 2008 it was very easy and at times even fashionable to dismiss Zanu PF as a spent force. The party’s opponents took pleasure in delivering excoriating criticisms of a party they accused of having presided over one of the worst economic phases in the country’s history.
Even as way back as the late 1990s, Zanu PF had to defend its seemingly indefensible record of having exposed Zimbabwe to unworkable International Financial Institutions’ prescriptions such as the Structural Adjustment Programmes (ESAP), and then we had a whole decade of political and economic chaos that started in year 2000.
Yet after four years of a unity government between Zanu PF and the two MDCs that began in 2009, it is now as plain as day that Zanu PF is once again on the offensive. The opposition, particularly the MDC-T, is panicking, something that was clear in Marondera, when Tsvangirai delivered his speech. The timid and unsure demeanour of the MDC-T leader was indeed a telling picture.
While the MDC-T’s panic is also obvious in its ceaseless rumbles against all and sundry; the recent court applications to delay the polls quickly come to mind; their hurriedly put together election manifesto also speaks volumes to the unpreparedness of the party. When put against that of Zanu PF, the manifesto is truly sophomoric and definitely not anything that could provide a sea change for Zimbabwe come July 31.Advertisement

Ignoring the risk of being called a Zanu PF sympathiser, one cannot help but awestruck by the manner in which the party craftily repackaged itself. Its manifesto has many issues that the MDC-T’s strategists, by omission or commission, chose to ignore.
As a starting point Zanu PF asserts its liberation war credentials, something which very few in Zimbabwe and beyond can argue against. It goes without saying that those who grew up in Rhodesia and many in the rural areas look back at the time with distaste. Zanu PF, therefore, despite its post-1980 record remains their liberator, their defender and guarantor of freedom against racialism and foreign oppression. This is the first history and legacy jab that caught the MDC-T napping, rendering their campaign for the older generations and rural voters a definite wild goose chase.
Coming to the tangibles, in this case those tangibles that define the past, present and future of Zimbabwe like the all-important issue of land, the MDC-T seems to all but put up an act. Although the MDC-T rightfully points out that “access to land and the enhancement of agricultural productivity is central to our sustainable development and eradication of poverty”, nothing more concrete is presented in its manifesto to reassure the nearly 300,000 potential voters who benefitted from the fast-track land reform since the year 2000.
The context in which the land issue is handled, particularly the mention of sidelining the government in pricing of agricultural commodities and access to external markets through strict “compliance with World Trade Organisation agreements” bears all the hallmarks of a party bent on appeasing international agricultural concerns at the expense of small holder farmers in Zimbabwe once in power. Amongst the new farmers there are those in touch with the goings on in other African countries as far as agricultural land is concerned. The mention of land grabbing by multinationals in some East African countries at the expense of local people definitely sends cold shivers down their spines. They will do everything within their means to deny the MDC-T any votes from them.
Zanu PF on the other hand seems to have mastered the art of turning weaknesses into strengths, or maybe good fortune has simply knocked on its doors. The chaos that characterized the land reform program at the turn of the century was indeed an albatross on the party’s neck, but as the fortunes of the new farmers are slowly beginning to change for the better, so is the popularity of the Mugabe. Two new narratives with a positive message on Zimbabwe’s land reform from Professor Ian Scoones, of the University of Sussex in the book “Zimbabwe’s Land Reform: Myths and Realities” and Joseph Hanlon’s, Jeanette Manjengwa’s and Teresa Smart’s “Zimbabwe takes back its land” seem to have rejuvenated Zanu PF.
The encomiums do not end there, even South Africa’s Mail and Guardian newspaper reported in June this year that Zimbabwe’s tobacco exports left the country’s pockets bulging with $771 million, something which could turn anyone, even the former white farmers, green with envy.  While riding on the crest of the wave of the new-found popularity, Zanu PF is not letting its guard down as evident in its manifesto. The party strategists deliberately jammed up their campaign strategy with the word ‘land’ and more so, defending the gains of the post-2000 land reform. This is what farming-addicted Zimbabweans want to hear as the country face a crucial election in a few weeks.
Having pocketed the ‘farmer’s vote’ Zanu PF seems confident that its ‘indigenisation and empowerment’ policy will win it the urban vote. This presumption might not be far-fetched, given the patience of Zimbabweans as witnessed in the past decade. Zanu PF knows this very well. If it took a decade to finally realize the benefits of a land reform that was once despised as total madness, there is also a chance that Zimbabweans will tolerate another ‘chaotic’ takeover of mines and companies in the hope of realising the benefits sometime in the future.
But the ‘people’ as owners of their own economy, are not particularly mentioned by the MDC-T. To the contrary, the MDC-T manifesto’s sections on the economy are not contextual to the section of Zimbabwe that has tasted ‘ownership of the economy’ and thousands others expecting to join through indigenisation. If anything the MDC-T’s economic plan reads like a piece taken from an ultra-conservative Chicago School of Economics textbook.
So, how can the MDC-T improve its performance on July 31? At the moment the odds are not in their favour. The answer lies in two very radical options which have been repeated again and again by several analysts. First the party has to try hard to have an eleventh hour coalition with Welshman Ncube’s MDC and, through that, hope to get the Midlands and Matabeleland vote. Second, the party might have to tell Zimbabweans what they did not write in their manifesto – that Zimbabwe’s economy belongs to them and that they will do everything to defend this if they come to power. Tsvangirai must heed this call.
Melusi Nkomo is a Ph.D candidate at the Graduate Institute of International and Development Studies (University of Geneva) Geneva, Switzerland. He can be reached at mnkomozim@yahoo.co.uk