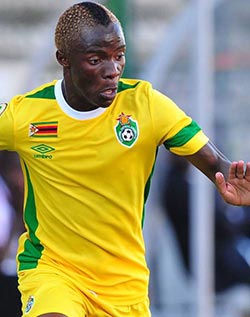 AFTER the exit of the hosts, local supporters are beginning to cheer on their neighbours the Warriors who have reached the quarter finals of the tournament.
Zimbabwe are set to reap the rewards of South Africa’s early exit from the African Nations Championship with their team gaining following from local fans.
Bafana Bafana disappointed their fans when they were expelled after losing 3-1 to Nigeria in their last group game on Sunday evening.
Neighbours Zimbabwe have become the favourites for local fans who cheered them on during their 1-0 defeat of Burkina Faso in Cape Town on Monday night as the Warriors reached the quarter finals.
Chants of ‘BaWarrior BaWarrior’ replaced Bafana Bafana, the nickname of the South African team, as locals adopted the Warriors, harking back to the 2010 World Cup when South Africans cheered Ghana on with chants of ‘BaGhana BaGhana.’
“You need a Plan B if you are supporting Bafana Bafana in any competition especially at home and more often you will put that plan into action,” said local fan Khanyisa Bala.
“I was hoping to see Bafana here in Mangaung for the semis and have tickets but now l am keeping my fingers crossed that Zimbabwe will go past Mali and come here. l have some Zim friends and hope we can watch and support the Warriors together.
The last southern African side remaining in the tournament, Zimbabwe will take on West Africans Mali for a place in the semi-finals this weekend.Advertisement