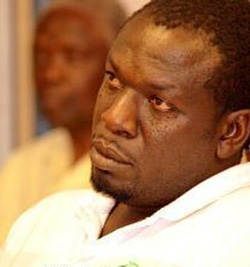 AWARD winning and veteran playwright, Raisedon Baya will on Friday premiere his long awaited new play, The Taking.
The play will be launched at the Bulawayo Theatre on Friday evening.
In an interview with NewZimbabwe.com, Baya said everything is set for the launch of the play which tackles Zimbabwe’s controversial land issue.
“Initially this play was supposed to be launched in November last year but due to logistical challenges we failed to premier the show,” he said.
“Since everything is now in order we are going to launch the play on Friday. The play has created a lot of anxiety and we are expecting a full house during the launch.”
The acclaimed playwright said after Bulawayo the play will be taken to Mutare, Masvingo and Harare where it will feature at this year’s Harare International Festival of Arts (HIFA).
There are also plans to take it to South Africa and other African countries.
“This play is relevant to most countries in African because the land issue is not only unique to Zimbabwe. Land is a national treasure and heritage which any nation is identified with,” said Baya.
The play features five veteran actors who include Aleck Zulu, Gift Chakuvinga, Musa Sibanda and Baya himself.Advertisement