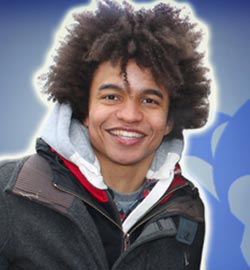 RADZI Chinyanganya host of long running top BBC children’s television programme Blue Peter recently gave viewers a glimpse of his life as he presented a special edition of the show.
The programme’s newest presenter visited his former school, Adams’ Grammar School in Newport, and also returned to his home city of Wolverhampton as part of a feature on his early life.
In October, the 26-year-old became the 37th presenter on the iconic show, now screened on BBC.
In Friday night’s show viewers met Radzi’s mother Barbara, from Dundee Scotland.
He said: “You know what, she never tells me off, she only has to give me one of her her looks and I know I’m in trouble.”
He also introduced his sister Rufaro who studies fashion in London and showed family photographs, including a picture of his father, originally from Zimbabwe, coming second in the sack race at his school sports day.
On his return to his school, he said: “I loved this place.”
The enthusiastic presenter was shown reuniting with design and technology teacher Andy Jones, who led Radzi and his team when they won the Astrazeneca Young Designers Award in 2005.
Radzi joked that classmates didn’t want his autograph when he was in school – but there were plenty of Adams’ pupils asking for it on his return.
Radzi said: “I wanted to be a Blue Peter presenter since I was 10.
“I used to ask people whether they wanted me to sign their homework diaries so that they could sell it when I became a famous presenter, but not many of them took me up on the offer.”Advertisement