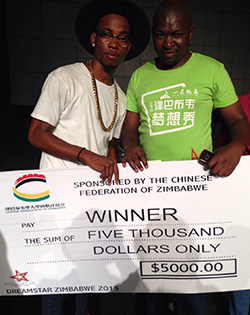 BEATBOXER Takudzwa ‘Probeatz” Mashonganyika is this year’s winner of the DreamStar Zimbabwe Talent show and walked away with $5,000 cash prize money after beating other 16 finalist.
In addition to the cash prize, Mashonganyika is also set to travel to China on a cultural exchange.
The talent show, in its second year, is sponsored by the Chinese Federation in Zimbabwe and the finals were held recently held at 7 Arts Theatre in Harare.
Using the mouth, lips, tongue and voice, beat boxing is an art element in hip-hop that blends vocal percussion with beat boxing to produce extraordinary drumbeats and musical sounds.
Speaking to NewZimbabwe.com soon after the finale, DreamStar spokesperson Rumbidzai Matinanga said the talent show is aimed at taming raw talent, adding that this year edition had a number of unique gifts.
“As the organisers of DreamStar Zimbabwe Talent Show, we want to bring a new dimension to emerging artistes by providing them with a platform to showcase their artistic talent and probably make a living through it without being exploited,” she said.
“We are going to be working closely with all the top 10 winners, engaging choreographers and voice trainers so that they realise their dreams.”
She added the 3rd edition of the event next year would also search for talent in rural areas.
Meanwhile, crowd favourite Probeatz got a standing ovation after his performance left the audience asking for more.
“I am happy to be the overall winner and hopefully this is the beginning of great things in my career,” he said.
“When I started off five years ago through watching beat boxing videos, my dream was to build a studio that would promote untapped talent in my neighbourhood.
“There is going to be a lot of adventure as I will be trying to explore new zones that will probably see me engaging celebrated artistes like Jah Prayzah and Winky D for collaborations.”
He said he draws his inspiration from music producers such as Swizz Beatz, Timberland, David Guetta and Calvin Harris.
Other winners Soul Finders, an eight-member dance group from Mabvuku-Tafara, emerged second and pocketed $3,000, while, from Gweru Polytechnic, Nyasha Dengwani got $1,000 for coming third.
The other 10 losing finalists did not go home empty-handed either, as they received $500 each.Advertisement

Guest of honour at the event, Chinese Ambassador to Zimbabwe, Huang Ping said the winners would go a cultural exchange in China.
“I was thrilled by the wonderful performances; all the contestants presented on the stage are talented. They were amazing to watch,” said the envoy.
It was a fun-filled and exciting grand finale as the 16 finalists mesmerised the audience at the memorable concert that was full of glitz and glamour.
Additional entertainment was provided by Trevor Dongo, Extra Large BaShupi and Madiz.