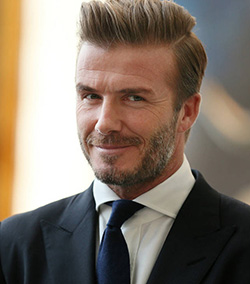 UNITED States: David Beckham can finally see the goal in Miami, and his Major League Soccer team is about to be born.
The soccer icon and his group of partners announced plans for a news conference Monday, saying they will make “an important announcement on the future of soccer in Miami.”
Beckham is ready to draw his first Miami crowd, too: The event at a downtown arts center will be open to fans. MLS, which will stream the event live on its website, said they were participating in what will be “a special announcement.”
MLS Commissioner Don Garber is among those expected to attend, along with several Miami-Dade County political officials. Other members of Beckham’s group include Sprint CEO Marcelo Claure, entertainment entrepreneur Simon Fuller and South Florida businessman Jorge Mas — who tried unsuccessfully to buy the Miami Marlins last year.
Beckham has spent the last four years trying to bring MLS back to South Florida. The Miami Fusion played from 1998-2001, folding because of poor attendance.
Beckham’s plans for Miami were delayed because of ongoing challenges regarding where he could build a stadium for his new team. His group originally wanted a waterfront site, then settled on a plot of land in Miami’s Overtown neighborhood — a deal that has faced legal challenges, even after he spent $9 million to purchase a needed piece of land from the county.
There will be 23 MLS clubs this season, and the league is in the midst of trying to grow to 28 teams. Miami has long been considered the provisional 24th franchise, not having official status because of the stadium questions.
Those questions are apparently answered now to MLS’ satisfaction.
Nashville was recently awarded an expansion franchise, and when that team and Miami commence play it give MLS four franchises in the Southeast portion of the U.S. — with those clubs joining Orlando and Atlanta.
MLS is planning to choose another expansion club in Cincinnati, Detroit and Sacramento.Advertisement