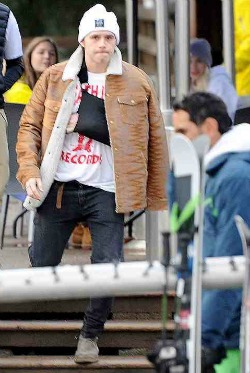 LOOKS like Beckham bent it the wrong way.
Brooklyn was spotted wearing his arm in a sling on Thursday after a nasty skiing accident.
The 17-year-old took a spill on the slopes during a vacation with his family in Whistler, Canada.

The son of soccer legend David wore a pained expression, probably both from the injury and the knowledge that his time on the piste had been cut short for this trip anyway.
So instead of ski clothes he besides that the sorrowful look, he wore grey boots and dark jeans, a white tee and a cosy fur-lined jacket, topping off in a snow-white beanie.
Brooklyn is – or at least was – enjoying the trip with his dad David, 41 and mom Victoria, 42, as well as his 14 and 11-year-old brothers Romeo and Cruz, and little five-year-old sister Harper.
The Beckham siblings got a soppy shout out from their dad during the week when he posted a touching Valentine’s message to his ex-Spice Girl wife.
Happy valentines not just to My wife but to the amazing family she has given me … 3 beautiful boys and an amazing little girl….,’ he wrote in an intimate snap of the couple of two decades kissing.
Meanwhile, Victoria also took to Instagram Tuesday to show off an adorable Valentine card drawn by her daughter Harper.
Captioned: ‘My little Valentine x VB’, she took snaps off the front of the card with pink hearts as flowers.
The little girl wrote: ‘I love you mummy. Happy Valentine’s Day. Will you be my Valentine?  Love Harper.’
It’s been a stressful couple of weeks for them after David’s recent email scandal, which saw him call members of the Honours Committee in the UK ‘unappreciative c***s’ after being snubbed for a knighthood.
Victoria was also dragged into the fray after coming under fire for pushing her brand amid the email scandal. Advertisement