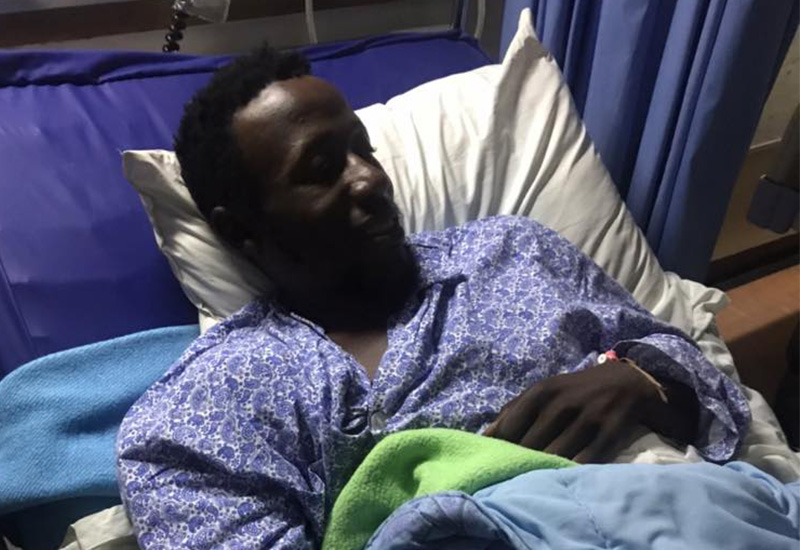 He was taken to Parirenyatwa Hospital for treatment with a subsequent court session conducted on his bedside Monday.

“In a court session held at a hospital Harare this afternoon, bedridden, Womberaishe Nhende national youth assembly deputy spokesperson was remanded out of custody to 22 June.

“He is being charged with criminal nuisance after having been arrested at MRT House before being beaten to a pulp by police.”

During the beatings, Nhende allegedly suffered a deep cut on his shin, bruised ribs and knocks on his head.

Police are said to have changed hands in kicking and beating the activist using baton sticks on parts of his body, including his chest.

After the beatings, anti-riot police in a white police Mazda pick-up vehicle blocked the media from taking pictures and videos as they surrounded the vehicle whilst the youth activist lay motionless on the back of the truck.

Party youth leader, Obey Sithole told NewZimbabwe.com that Nhende failed to get hospital attention on time leading to his condition deteriorating on the day he was attacked.

The rare hospital trial of an opposition MDC Alliance member follows those of MP Joanna Mamombe and party activists Netsai Marova and Cecilia Chimbiri at a private Harare hospital recently.

The three were allegedly abducted and brutalised by suspected state security agents after they had taken part in an anti-government protest in Harare’s Warren Park suburb last month.