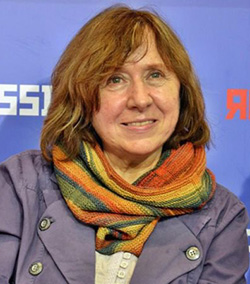 BELARUSSIAN author Svetlana Alexievich won the Nobel Prize for Literature on Thursday for her portrayal of the harshness of life in the Soviet Union and in her first public response denounced Russia’s intervention in Ukraine as an “invasion”.
The Swedish Academy said Alexievich’s work, which chronicles the lives of Soviet women during World War Two as well as the consequences of the 1986 nuclear disaster in Chernobyl and the Soviet military adventure in Afghanistan, was “a monument to suffering and courage in our time”.
Alexievich collected hundreds of interviews from people whose lives were affected by these tumultuous events, putting them together in works that were like a “musical composition”, the academy said in awarding the 8 million crown ($972,000) prize.
“By means of her extraordinary method – a carefully composed collage of human voices – Alexievich deepens our comprehension of an entire era,” the academy said.
Born in Ukraine in 1948, Alexievich lived in exile for many years because of her criticism of the Belarussian government and after returning home four years ago has kept a low profile, staying out of politics.
But after the prize was announced on Thursday she obliquely criticised Belarus’s hardline leader Alexander Lukashenko and denounced Russian forces for their involvement in the separatist conflict in neighbouring Ukraine.
“It is occupation, a foreign invasion,” she said at a news conference in Minsk, adding that she wept when she saw photographs of those killed during pro-European street protests in the Ukrainian capital last year.
“I love the good Russian world, the humanitarian Russian world, but I do not love the Russian world of Beria, Stalin and Shoigu,” she said, referring to Soviet leader Josef Stalin, the security chief responsible for Stalin-era mass purges, Lavrenty Beria, and the current Russian defence minister, Sergei Shoigu.
The Kremlin replied tartly. “Of course, we congratulate her … But I’m sure she does not possess the information to make a positive evaluation of what is happening in Ukraine,” spokesman Dmitry Peskov commented in Moscow.
Not voting
On Belarus, she said she would not vote in a presidential election due to take place there this month and which Lukashenko, already 21 years in power, is expected to easily secure a further term.Advertisement

“I will not vote in the elections because we know who will win, that Lukashenko will win,” she said.
Alexievich said the prize would enable her to devote herself to two new writing projects.
“For money I can buy one thing, I buy freedom. I take a very long time to write my books – from five to ten years,” she told Swedish television separately after the prize announcement.
“I have two new ideas for two new books, so I am glad that I will be free now to work on them.”
Alexievich worked as a teacher and a journalist after finishing school, later living abroad for many years in Sweden, Germany and France.
“Real people speak in my books about the main events of the age such as the war, the Chernobyl disaster, and the downfall of a great empire,” she said in a biographical text published on her website.
“But I don’t just record a dry history of events and facts, I’m writing a history of human feelings,” she said.
Her books, primarily written in Russian, include “Voices from Chernobyl – Chronicle of the Future”, and “Zinky Boys – Soviet voices from a forgotten war”, a portrayal of the Soviet Union’s war in Afghanistan.
Documentary style
Alexievich’s documentary style of writing first became popular in the former Soviet Union in the 1980s. But she has long been an uncomfortable writer for the authorities due to her humanistic, emotional tales of peoples’ fates entangled in major historic developments.
One of her best-known works is “War’s Unwomanly Face”, which took several years to get published as Soviet authorities saw it as subversive and undermining the myth of the Soviet army’s victory in World War Two.
In the book, Alexievich offers an unusual account of the war, moving away from military narrative and telling the tales of Soviet women who took on male roles, fought on the front lines, killed and got killed, but still looked at the shattered world around them from a feminine perspective, focusing on human suffering and basic emotions free of any pathos.
“She has invented a new literary genre. She transcends journalistic formats and has pressed ahead with a genre that others have helped create,” said Sara Danius, permanent secretary of the Swedish Academy.
“It’s more or less like a musical composition, so that in the end you have something like a vast chorus.”
Literature was the fourth of this year’s Nobel prizes. The prize is named after dynamite inventor Alfred Nobel and has been awarded since 1901 for achievements in science, literature and peace in accordance with his will.