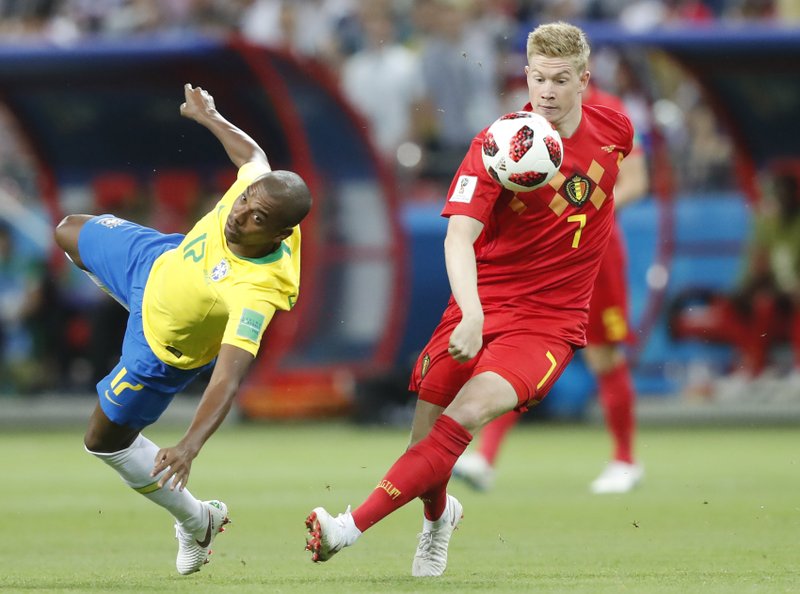 RUSSIA: Belgium reached the World Cup semifinals for the first time in 32 years by holding off five-time champion Brazil 2-1 Friday, sending Neymar home without living up to the expectations of being soccer’s most expensive player.

Belgium scored the decisive goal on a counterattack just after a corner had been taken by Neymar. Romelu Lukaku surged forward with the ball and Kevin De Bruyne put it in the net to give Belgium a 2-0 lead in the 31st minute.

“This was the biggest test for us,” De Bruyne said. “Brazil was so strong in attack.”

The opener came after a bit of good fortune. Fernandinho’s trailing arm inadvertently helped Belgium captain Vincent Kompany’s header land in his own net in the 13th minute.

As Belgium lost cohesiveness in the second half and Brazil’s changes stirred the team, substitute Renato Augusto reduced the deficit in the 76th with a header.

But it was too late for Brazil to muster an equalizer as efforts to force the game into extra time were thwarted by Belgium goalkeeper Thibaut Courtois.

For the third time in a World Cup — after 1982 and 2006 — the semifinals will feature only European teams. Belgium and France will meet in St. Petersburg on Tuesday. The next day in Moscow, it will be either England or Sweden against either Russia or Croatia. The other two quarterfinal matches will be played Sunday.

Humiliated 7-1 by Germany in the semifinals fours year ago on home soil, Brazil didn’t even get that far this time. Just like defending champion Germany and Argentina before them, the Kazan Arena is where Brazil’s World Cup challenge ended.

“This is beating Brazil in the World Cup, in the knockout,” Belgium coach Roberto Martinez said. “Just treasure it and pass it down in the generations.”

Belgium is now on a 24-match unbeaten streak.

There is guaranteed to be a fourth straight European team winning the World Cup on July 15 in Moscow. Belgium, which finished fourth at the 1986 tournament and has never won the European Championship, will hope its golden generation can deliver its first trophy.

“Now we need more energy for the next game,” Martinez said, “so let’s make sure that we’re all together and we’re all driving each other to be as good as we can … in the semifinal.”

With eight shutouts in the last nine games, including three in the four games in Russia, Brazil had the tightest defense of the remaining teams at the World Cup. But it was breached after 13 minutes in Tatarstan. Fernandinho’s own-goal ensured for the first time since March 2017 that Brazil was trailing in a competitive match. Unlike then — an eventual 4-1 victory over Uruguay — there was no comeback.

Not when Courtois was proving to be an impenetrable barrier in the Belgium goal, denying Marcelo’s strike before the lead was extended.

Criticized for his playacting, Neymar then went down lightly under minimal contact from Marouane Fellaini at the start of the second half. But as the referee started to seek a video review, Neymar appeared to urge him against it. A booking — if he got one for diving — would have ruled him out the semifinals.

But reaching the last four looked an increasingly unlikely proposition. Even after Philippe Coutinho’s cross was headed in by Augusto, who managed to evade center backs Vincent Kompany and Jan Vertonghen three minutes after replacing Paulinho.

“Sometimes you have to accept that Brazil has got this finesse, that quality, and that they’re going to break you down, and (Belgium) just refused to accept that. This is something special.”