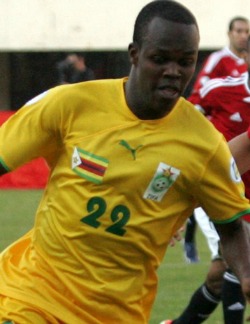 ZIMBABWE international striker Knowledge Musona continues to shine in the Belgium pro-league after scoring his second goal of the campaign as KV Oostende saw off Mouscron Peruwlz 2-1 in a league match on Sunday.
The KV Oostende striker – a penalty taker for the Warriors – has assumed the same responsibility at the Belgian club where he has become a key member of the squad.
And with his team trailing 1-0 after Serbian forward Filip Markovic had thrust Mouscron Peruwelz ahead at the stroke of the first half, Mouscron Peruwelz conceded a penalty, and Musona accepted the responsibility to beat Brazilian goal keeper Vagner Silva for the equaliser.
Montenegro midfielder Adam Marusic then scored the insurance goal seven minutes from full time, profiting from a pass by Belgian forward Yassine El Ghanassy.
Sunday’s goal was Musona’s second in three matches of the campaign after scoring with a wonder strike in a league season opener in a 2-1 defeat to Genk leaving watchers of the global game nodding in acknowledgement at a great piece of technique.
Musona, who finished last season’s campaign with 13 goals scored in the referee’s optional time, weaving his way past three defenders before unleashing a shot to beat the Genk keeper.
Genk had taken the lead in 50th minute before adding a second on 90 minutes.
The striker’s promising start comes as good news for Warriors coach Kalisto Pasuwa as he readies for the final 2017 Group L African Cup of Nations qualifier against Guinea in Conakry on September 3.
The match is however, a dead rubber as the Warriors have already qualified for the biennial soccer showcase to be staged in Gabon next year in January with a game to spare after beating Malawi 3-0 in the previous match.Advertisement