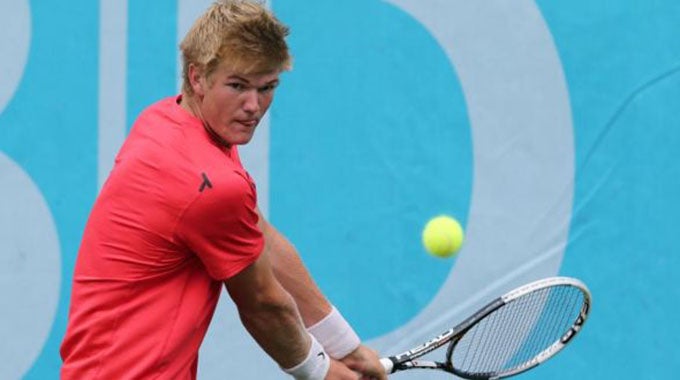 TOP Zimbabwe doubles tennis player Benjamin Lock celebrated the biggest win of his professional career after combining with American Evan King to win the men’s doubles final at the Launceston International in Tasmania, Australia on Sunday.

The Launceston International is Lock’s first tournament win on the ATP Challenger Tour which is the second highest level on men’s professional tennis circuit below the top tier ATP Tour.

Lock and his American playing partner were made to fight hard for the win as they rallied from behind to defeat Belgian Kimmer Coppejans and his partner Sergio Martos Gornes of Spain 3-6 6-3 (10-8).

The Europeans were looking comfortable up a set and with the second going on serve until Martos Gornes dropped serve in the fourth game.

The pair bounced back to take a firm grip of the tie-break before King and Lock stormed home.

Having twice won super tie-breaks to reach the Launceston final, the Lock and King completed a hat-trick of remarkable comebacks in the tournament by fighting back from 8-5 down with five straight winners to win the super tie break 10-8.

Lock was naturally elated after the memorable win against the odds.

“Evan also saved a match point in the first round so we went from one point away from going out to winning the tournament,” Lock said.

“Tennis is a crazy sport. We squeaked out a lot of tight matches but did not put pressure on ourselves. This is my first challenger title, so it’s massive for me. I had lost two finals before in 10-point tie-breaks.”

King, who is close friends with Lock having played regularly in Zimbabwe including winning the Old Mutual ITF Futures title at Harare Sports Club your years ago added: “We had lost three first sets getting here so we’d been in that position before, plus we are extremely good friends so we can stay loose even if we are 8-5 down in a tie-break.”
Lock’s good form will be a major boost for the Zimbabwe Davis Cup team ahead of their Davis Cup World Group II play-off tie against Syria at home in March.

Lock is one of the key players in Zimbabwe’s Davis Cup team together with his young brother Courtney, Takanyi Garanganga and Mehluli Sibanda.