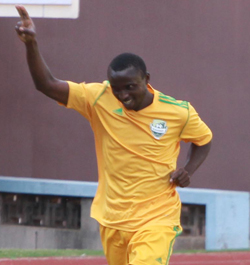 HOW MINE have signed former FC Platinum and Dynamos forward Benjamin Marere on a one year contract.
Marere’s short term contract with Dynamos was not renewed after he spent the second half of last season with the Harare giants.
He had been club hunting since last month and at one time tried his luck at Highlanders but to no avail.
How Mine came to his rescue when Philani Ncube invited him for training before subsequently committing pen to paper.
“There is no doubt that Benjie is one of the most experienced players in this country,” Ncube said.
“I am one person who favour experienced players to help upcoming youngsters learn so much in football. I think our strikeforce is now one of the strongest in the league.”
With Marere 30-years-old, he joins a number of How Mine players who are above or nearing that age like veteran defender Hebert Dick, Gilbert Banda, George Magariro, Menard Mupera, Wonder Sithole and Marvel Samaneka which has earned the club the moniker “Old People’s Home.”
Another ageing midfielder Godfrey Nguwodzawo after dumping Harare City is training with the club while youngster Fungai Chirinda is also trying his luck after spending last season at Shabanie Mine.Advertisement