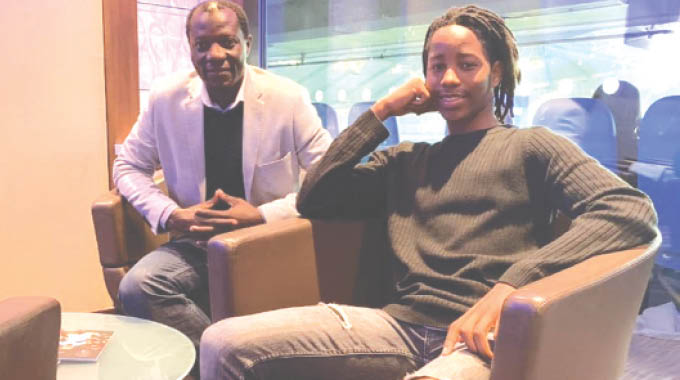 BENJANI Mwaruwari Jnr’s hopes of following in his father’s footsteps by playing for the Portsmouth first team have been dealt a major blow after he was not offered a new scholarship deal by the English League One side’s academy.

Benjani junior had been in his second spell with Pompey and most recently featured for the under-16s.

However, according to Portsmouth News, the 15 year-old son, Benjani Jr, has left Portsmouth after the English League One side decided against giving the youngster a new scholarship deal.

However according to Portsmouth News website, Portsmouth’s academy elected not to offer the young striker a scholarship and informed him of their decision three weeks ago.

Benjani junior has another opportunity to continue his development as he is currently training with Yeovil Town in a bid to win a deal with the fifth tier National League outfit.

Nonetheless, his release will be a disappointment for some of the club’s fans who would’ve been eager to see another Benjani Mwaruwari make a name for himself with the Blues.

His dad was signed by Harry Redknapp from Auxure in January 2006 for a then-club record fee of £4.1m.

Benjani senior went on to become a key presence in the Great Escape, ultimately netting in the Blues’ 2-1 triumph at Wigan which confirmed their Premier League survival in April 2006.

The Zimbabwe international was sold to Manchester City in February 2008, following two hat-tricks in the 2007-08 season.

However, the striker did return for an ill-fated second spell in the 2011-12 campaign when signed by Steve Cotterill on a free transfer.

Despite his unsuccessful second spell, Benjani senior He remains an endearingly popular figure among the Fratton faithful, who respected his work ethic and embraced that iconic goal celebration.

In total, he made 94 appearances and scored 20 times and can always anticipate an excellent reception upon visits to Fratton Park.

His family are based in Ringwood in south-west Hampshire, England, although did move to South Africa for two years, with Benjani junior taken out of Pompey’s Academy.

Upon their return to England, the youngster rejoined the Blues’ youth setup, with this his third season back.

The former Zimbabwe Warriors captain revealed last year that the legendary former goalkeeper Bruce Grobbelaar once called him to say that he wanted to see his talented son playing for Liverpool.

“My son is turning 15 in November, and he is playing with Portsmouth Academy,’’ he said in an interview with the South African radio channel Metro FM.

“For the past four, five years, I could hear people talking about him, even Bruce Grobbelaar called the club and said I want this boy to come to Liverpool.

“I said no, I just want him to enjoy his football, you know when you are young, you need to enjoy it, you don’t have to be pressured.”

Benjani said his wife has been supportive of their child.

“The mother has been supportive. She has been there for him since he was six when he joined Portsmouth, driving him to the training, unlike us in Africa where they punish you for going and playing football,’’ he said.

“Here in Europe, you have to take the kids to the training, to the games, they give you a programme, they give you everything, and I am glad the mother is doing that.

“Even if he doesn’t make it to the top, we support him.”