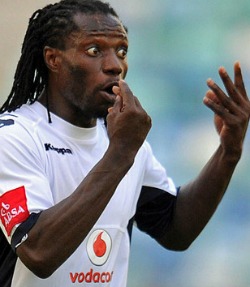 FORMER Manchester City striker Benjani Mwaruwari says he is likely to retire before next season.
Mwaruwari, who failed to impress at Bidvest Wits this past campaign, has nevertheless enjoyed a fine career.
The 35-year-old joined Jomo Cosmos in 1999 before earning a move to Swiss side Grasshoppers.
He went on to represent the likes of City, Sunderland and Portsmouth, while he scored eight goals in 31 appearances for Zimbabwe.
“I don’t think so (when asked if he will continue playing football),” Mwaruwari tells KickOff.com.
“I think I have done my part. I still have to make a decision but I don’t think I will continue playing next season.”
There has been talk Mwaruwari could take on a coaching role at Wits once his playing contract expires in June.Advertisement