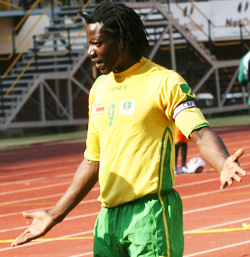 FORMER Warriors captain, Benjani Mwaruwari, has joined the race to land the post of ZIFA presidency.
Benjani flew into Harare on Monday night and immediately picked up the nomination forms at the Zifa offices.
His backers believe the 38-year-old is the right candidate to lead the FA and that he could help Zimbabwe football grow, in the next few years.
The former Manchester City forward has revealed he wanted to play a key role in the development of the Zimbabwean game.
Speaking last week, Benjani said “I’m available to assist in improving local soccer and I believe I can do that in various positions.
“I feel it’s time that football people take over the running of the game because time and again we have let other people in but the only reward the game has got is plummeting standards.
“I’m ready to use my contacts all over the world to make a difference in the local game.
“We want football to be the winner at the end of the day so I believe the onus is on people who have roots in the game to challenge for these positions and run football in the interest of the players, coaches, administrators and, most of all, the fans.
“We should not just let any person just come in when we know he has little interest in the game.”
One of his backers who declined to be named confirmed on Tuesday Mwaruwari had picked up the forms.
“He has picked up forms. He is one of the candidates for one of the post. We will advise once he has filled in the forms,” said the supporter.
Mwaruwari will battle it out with Harare business man Philip Chiyangwa, who has already hit the ground running.
The tycoon has been donating money to the Mighty Warriors and the Warriors following their success recently.
The Mighty Warriors have qualified for the Olympic Games in Brazil next year while the Warriors qualified for the Rwanda 2016 Chan finals.
Other names reportedly interested in the top post include former PSL and Dynamos secretary Leslie Gwindi, former Warriors fitness trainer and Dynamos chairman Leo Mugabe among other.
Nominations close on Thursday with the vetting process slated for Saturday.
Elections to choose a new Zifa leadership to replace the sacked Cuthbert Dube board will be held on December 5.Advertisement