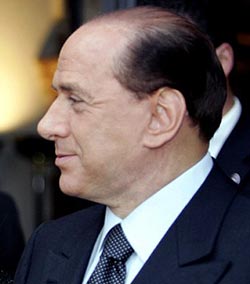 ITALY’S Silvio Berlusconi has cut off monthly payments of $3,400 to a host of young women who attended his parties as part of cost-cutting measures by the ageing playboy, Italian media reported on Friday.
The decision could also have something to do with his coming under investigation for witness tampering opened by prosecutors in connection with his conviction for having sex with an underage 17-year-old prostitute.
“He helped us out, me and the other girls,” said Aris Espinosa, 24, one of the models and dancers known as “Olgettine” after the street in Milan, Via Olgettina, where they lived in apartments paid for by Berlusconi.
At one point, a total of 14 young women were living in the apartments and they were heard calling Berlusconi and his accountant in multiple police wiretaps to ask for more cash — referred to as “flowers” or “fuel”.
“I don’t see how the money could be seen as suspicious,” Espinosa said, adding that she was now having some financial difficulties and was hoping to put out a tango record with a fellow “Olgettina”.
The former prime minister and flamboyant billionaire tycoon’s finances have been hit by an expensive divorce settlement with his second wife Veronica Lario and a lack of dividends from his business empire Mediaset.
Several recent investments have also fallen through, including a 75-million-euro villa he bought with a plan to set up a university but which now lies abandoned.

Berlusconi is also moving to a luxury apartment in central Rome where the rent will be less than the 2.1 million euros a year he pays for an entire palace nearby, the La Repubblica daily reported.
Berlusconi’s football club, AC Milan, is also weighing on finances and he is having to pay its chief executive Adriano Galliani handsomely after a spat between Galliani and Berlusconi’s daughter and board member, Barbara.
Berlusconi is on “a strict financial diet”, La Repubblica said.
His girlfriend, Francesca Pascale, was quoted recently as saying she has had to keep tabs on out-of-control household spending for her 77-year-old partner.
Pascale said Berlusconi was being charged 80 euros a kilo for green beans and for some reason was receiving daily deliveries of fish, which he does not like.Advertisement