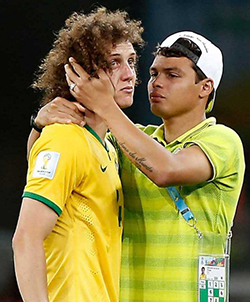 BRAZIL’S World Cup was the opportunity to expunge the memory of the darkest day in their sporting story, namely 1950’s “Maracanazo” when Uruguay won 2-1 at the Maracana to take the trophy from a host side who had seemed certain to be crowned champions.
Instead, they suffered the worst defeat in their history, Germany’s 7-1 rout of Brazil in this World Cup semi-final a chapter just as dark as that day in Rio 64 years ago.
The country’s media were in no doubt. GloboEsporte’s headline called it “The Disgrace Of All Disgraces”. For the sports paper Lance! it was “The Biggest Shame In History”.
With the match effectively over inside half an hour, and several careers and reputations destroyed for good, the internet wasted no time in creatively sticking the boot in to Brazil.
Here’s our pick of the memes doing the rounds as Germany tore Brazil to shreds in Belo Horizonte.

Paris Saint-Germain paid how much for David Luiz? #BrazilNuts