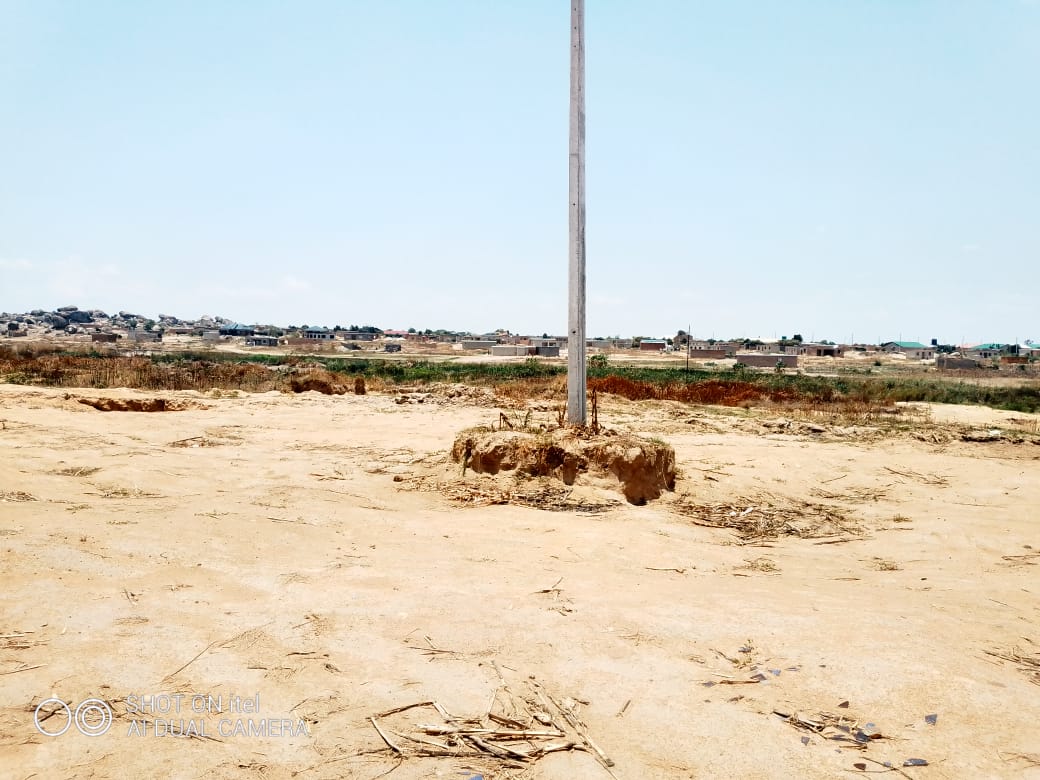 Sand poachers have dug around this electricity pole in Hopley, Harare
Spread This News

UPON entering the Hopley community, a suburb situated about 16km south of Harare’s central business district, one is welcomed by a hive of activity as residents go out of their way to earn a living.

An area popularly known as kumajecha quickly steals one’s attention due to the nature of work done there, the environment under which the people toil and how they labour to make ends meet.

The area is rich in pit sand, a natural and coarse type of sand used in construction due to its superior binding properties and residents, like bees on a bee hive converge to extract it.

Men, women and children of school going age can be seen scattered around the area rummaging the land for pit sand for sale.

The demand for sand is escalating due to an upsurge in housing construction in urban areas so those digging for it are always on the move, moving from place to place, burrowing the earth with reckless abandon.

The situation has become so bad that some are extracting pit sand around areas with power lines which increases the risk of them being electrocuted or damaging electricity infrastructure.

Several accidents related to exposure to power cables have been reported in the country.

“Sand mining is the world’s largest mining endeavour, responsible for 85 percent of all mineral extraction.  It is also the least regulated, and quite possibly the most corrupt and environmentally destructive,” said environmental protection advocate Tsungirirai Shambare.

A scan of the area showed that borrow pits (areas where material usually soil or sand has been dug for use at another place or location) have become death traps.

The abandoned borrow pits are filled with runoff water from adjoining water bodies and become ponds.

Sources told newzimbabwe.com that children enjoy using the ponds as swimming pools exposing them to drowning.

“Stagnant water in the borrow pits is also fertile ground for the breeding of vectors like mosquito but women and children do their laundry and fetch water for their vegetable gardens there. We are sitting on a health time bomb,” said Hopley resident Tatenda Mavedzenge.

Experts said the abandoned borrow pits are a significant threat to public safety due to the dangerous deep vertical walls that are prone to landslides after heavy rains that enhance saturation and liquefaction.

These activities are not only a public health menace but are also posing a serious infrastructural dilapidation problem.

Dusty roads servicing the people in the area are sandwiched by borrow pits making it very difficult for drivers to navigate.

In the event that a vehicle veers off the road, chances of survival for passengers are slim because the pits and gulleys increase vehicle damage on impact.

Contacted for comment, men engaging in sand mining and selling indicated that they are aware of the environmental impacts of their activities but they also need to survive in a country that has deprived them of a decent living.

They are stuck between the proverbial devil and the deep blue sea.

“5 cubic meter of pit sand which is equivalent to one tonne costs US$45 if you have own transport and US$60 if we provide transport, loaders and off loaders,” said Talkmore Marufu one of the people selling pit sand in Hopley.

“This is good money that we are not stealing from anyone. It is not exactly how we wanted to live but it is what it is. At the end of the day people here have to feed their families hence damages to the environment become secondary,” he added.

Lower six student Takudzwa Mubaiwa said his parents are unemployed and he engages in sand mining to pay for his own tuition.

“I have to balance between attending school and working here.  I want to be a chartered accountant and if it means I have to work here to get there, so be it. I have no other means to get there,” he said.

Section 73 of the Zimbabwean Constitution provides that: “Every person has the right to an environment that is not harmful to their health or well-being,” but it appears circumstances are pushing men to violate this provision.

management but what is happening in Hopley is a threat to the attainment of this objective due to the need for survival.

In his study of Hopley settlement, titled Living in an Emerging Settlement: The Story of Hopley Farm Settlement, Harare Zimbabwe academic Abraham Matamanda noted that emerging settlements like Hopley are neglected spaces in which residents improvise in their daily life activities to enhance the liveability of the settlements.

“These citizens experience multiple shocks and stresses, which include lack of basic services, disconnection from formal services and the urban core, political exclusion, and violation of their human rights. In this regard, households engage in various activities that fall between resilience and desperation as they try to navigate their way in claiming the right to the city,” Matamanda said.

The study recommends politicians and the government to put aside political differences and consider the welfare of the people instead of advancing political agendas.

Harare City Council corporates communications manager Michael Chideme said: “We are aware of these activities and currently working with the Environmental Management Agency (EMA) to deal with the problem. We have made several arrests to deter the perpetrators and I believe the arrests have gone a long way in curtailing the problem otherwise it would have been worse.”

EMA senior environmental education and publicity officer for Harare Metropolitan, Batsirayi Sibanda was not forthcoming with a comment on the agency’s intended move to deal with the situation.

“I am at a workshop right now. I will respond when I am free,” Sibanda said.

There is need for a vibrant national mechanism to monitor sand

extraction and its impacts in the country.

Scientific and environmental impact assessments should be systematically implemented prior to any authorisation for sand extraction.

Further, government needs to strengthen the enforcement of existing laws and to develop new regulations as needed.

There is also need for government and the private sector to invest in research and development and identify alternatives for common sand as a building material such as alternatives to conventional concrete.