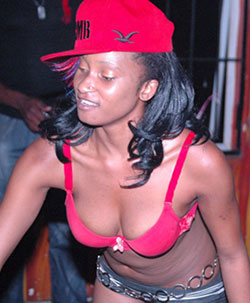 THERE was drama at Waverley Hotel in Bulawayo when Beverly “Bev” Sibanda slapped an unidentified woman, accusing her of calling her a prostitute soon after her performance on Saturday.
Throughout her performance, Bev was on the receiving end of continued abusive name calling from Waverley prostitutes.
They were accusing her of disturbing their business on the day as men were not willing to court them preferring Bev’s show instead.
Soon after her show, Bev finally lost her cool and attacked a lady she had identified as one of her abusers.
With the lady denying her claims, Bev could not contain her anger and unleashed unprintable abusive words towards her before slapping her.
“Bring her to my room, I want her to explain why she called me that. I am not a prostitute, but you are. That is why you are here, you are the prostitute not me,” Bev shouted.
She commanded the police to arrest the lady but they did not as there was no evidence to support Bev’s allegations.
“There are a lot of people here and it is wrong for her to accuse this lady. Anyone in this place could have shouted the obscene word,” explained one police officer on the scene.
With the police taking no action, Bev’s security team responded to her request and dragged the lady to their boss’ room. They stayed there for 30 minutes.
When the lady emerged from the room, she explained that Bev had tried to have her arrested but the police had refused. There was no one to support her claim.
During her performance, Bev also slapped a male fan that had gone on stage for a dance but had failed to perform to her expectations.
“Be flexible. If you were my man, I would end up bedding other men. Luckily I have Khama who is good at what he does, not you,” she said.
Earlier this month, Bev shocked all and sundry when she announced that she was dating married footballer Khama Billiat, a claim the Mamelodi Sundowns player has denied.
Bev rose to fame through some controversial dance routines but recently added music to her portfolio. However, her voice leaves a lot to be desired as it still needs to be fine-tuned.Advertisement