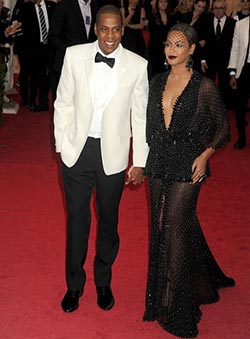 JAY Z, Beyonce and Solange have said “families have problems and we’re no different” after a video leaked of Beyonce’s sister attacking the rap mogul in a hotel elevator.
In an exclusive statement to The Associated Press on Thursday, the trio said they have worked through their differences and moved on since a video emerged this week showing Solange kicking Jay Z as Beyonce looked on.
“As a result of the public release of the elevator security footage from Monday, May 5th, there has been a great deal of speculation about what triggered the unfortunate incident. But the most important thing is that our family has worked through it,” the statement said.
“Jay and Solange each assume their share of responsibility for what has occurred. They both acknowledge their role in this private matter that has played out in the public. They both have apologized to each other and we have moved forward as a united family.”
It was the first comment the performers had made since the website TMZ posted the three-minute video on Monday, saying it was shot last week inside the Standard Hotel in New York City.
The video, which does not have audio, appears to show Solange attacking Jay Z in Beyonce’s presence; a security guard intervenes. The footage shows the performers in the outfits they wore to the Met Gala.
“The reports of Solange being intoxicated or displaying erratic behaviour throughout that evening are simply false,” the statement continued.
“At the end of the day families have problems and we’re no different. We love each other and above all we are family. We’ve put this behind us and hope everyone else will do the same.”
Beyonce and Jay Z were married in 2008.
Meanwhile, the hotel said Wednesday it had fired the person who recorded the video.
In a statement that did not name names, The Standard said it had identified the person responsible for breaching its security policies “and recording the confidential video.”
“The Standard has already terminated the individual and will now be pursuing all available civil and criminal remedies,” it said, adding that it would turn over “all available information” to police.Advertisement