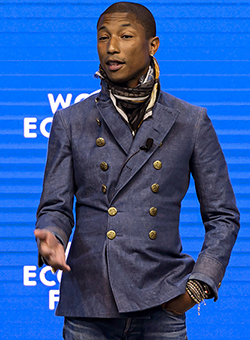 LEADING musicians including Beyonce, Jay Z and Kanye West have filed a lawsuit in US federal court against a French apparel brand, accusing it of using their images without authorisation.
Other plaintiffs in the collective lawsuit against Eleven Paris include “Happy” creator Pharrell Williams and R&B singer Rihanna.
The lawsuit, filed on Tuesday in New York, seeks an injunction and compensation for past sales of the items including shirts, caps, backpacks and cellphone cases.
Among the products named in the suit are T-shirts that feature the hooded faces of Beyonce and Williams and one of Rihanna with her index finger held up like a mustache.
The lawsuit said it was especially egregious that the items remained for sale at the Eleven Paris boutique in New York’s Soho district and that two new T-shirts just went on the market, which say “Kanye is my homie” and “Pharrell is my brotha.”
“Even after receiving warnings from plaintiffs … defendants continue to sell unauthorised products and to trade upon the goodwill associated with plaintiffs, all for defendants’ profit,” the lawsuit said.
Eleven Paris is also accused of using lyrics without authorization and choosing names for products that are nearly identical to those of the artists, such as “Cayonce.”
The lawsuit said that Eleven Paris “purposefully use(s) marks that are confusingly similar to plaintiffs’ respective trademarks.”
Eleven Paris says its apparel is sold in more than 800 stores in 25 countries, although the vast majority are in France.
“Negotiations have been underway with these individuals for nearly a year and continue,” the company said in a statement in Paris.
“Eleven Paris is determined to find a fair and balanced agreement with them and their legal representatives,” it said.
The use of celebrities’ images falls into complicated legal terrain with individual US states — but not the US federal government — recognising a “right to publicity” that allows a person to determine how he or she can be used for commercial purposes.
The lawsuit by the musicians makes the case that Eleven Paris infringed on their trademarks.Advertisement