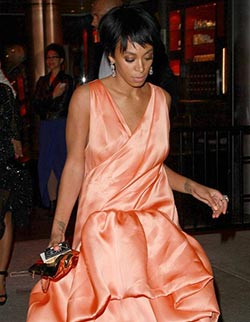 JAY Z was viciously attacked by his wife Beyonce’s sister Solange as the trio left the Met Gala after party in New York last Monday.
The 27-year-old was caught on surveillance camera lashing out wildly at her brother-in-law, 44, with both her arms and her legs, while her sister stood beside them helplessly.
The famous family were in an elevator descending from a soiree that followed the annual fashion fest at the Metropolitan Museum of Art.
The seemingly unprovoked attack plays out in footage obtained by TMZ.
Solange can clearly be seen kicking and swinging violently at Jay Z, the father of her two-year-old niece, Blue Ivy, after the trio step into the elevator.
According to TMZ sources, Solange was screaming at her family member when the fight erupted.
In the footage, a man who looks to be a bodyguard tries to hold Solange back but she manages to reach the rapper several times.
Jay Z grabs her foot to block a kick but never attempts to retaliate.
Beyonce seems sanguine throughout, and appears to be trying to calm her sister down … at one point she removes the long train of her dress from the fray.
The bodyguard can also be seen pushing the emergency stop button in the elevator at the 12th floor, perhaps to stop the fight spilling out in front of photographers.
Jay Z’s shocked appearance and hand to face as Solange marches angrily ahead after leaving the elevator were captured, however.
Beyonce tried to muster a showbiz smile as the threesome left but then departed with her sister in a car while her husband left separately.
It’s not yet known what provoked the fight.
Solange and the music mogul have been close for over a decade, with Jay Z – real name Shawn Carter – taking a big brother style role to the fledgling star after he started dating her sister.
Beyonce and Jay Z were famously friends first but started a relationship way back in 2008, they then married in 2011.
Beyonce is extremely close to her younger sibling, and made a surprise appearance at Coachella this year to support Solange’s set at the California music festival.
Solange usually accompanies the couple to events like the Met Gala and the Grammy Awards.
JAY Z KICKED PUNCHED