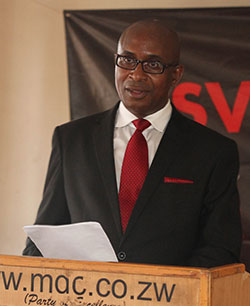 IT doesn’t need rocket science to appreciate that the Zanu PF regime, fronted by President Robert Mugabe, is slowly but surely disintegrating. It is now a matter of when, rather than, whether, the moribund Zanu PF regime will crumble like a deck of cards. Whichever way you look at it, Zanu PF has now entered the homestretch. The end is nigh.
The main thrust of this opinion piece is to locate Zimbabwe beyond the Robert Mugabe’s one–man dictatorship. It is apparent that Mugabe has never before been faced with the kind of internal revolt and unprecedented challenge to his hold on power like the one that is presently playing out. This paper argues, without any shred of hesitation, that Mugabe’s tenacious hold on State power is now very tenuous and under serious threat.
Literally, Mugabe is now living on borrowed time. Things have fallen apart and the centre can no longer hold. Fortunately for the wily and crafty political gladiator that Mugabe has always been, he knows that his hold on power is about to break down beyond redemption. But the old man is not going to go down without a concerted and vicious fight; make absolutely no mistake about that.
Granted, the political opposition to the Zanu PF regime is not as strong as it was about ten years ago, but then, there is also a very strong and persistent opposition to Mugabe’s rule that has been festering within the deeply divided and factionalized Zanu PF political edifice. This is the end game.
Even top military officials have summoned enough courage to blatantly refuse to be retired by Mugabe. This just goes to show that these top military officials have virtually decided to show the old man the middle finger. Going forward, it cannot be business as usual. Things can no longer be the same. Zimbabwe is heading towards very exciting, if not downright dangerous political times.
The ongoing BVR exercise has come a shed too late. It will definitely not be able to produce a credible and legitimate national voters’ roll in time for the 2018 plebiscite. Experiences in other parts of Africa such as Uganda, Kenya, Cameroun and Namibia, show that the electoral body needed at least three years to roll out an efficient and credible biometric voter registration exercise.
Put bluntly, the Zimbabwe Electoral Commission (ZEC), has got insufficient time between now and the holding of harmonised elections next year to efficiently and effectively roll out a credible BVR system. Painful as it is to state, this is the cold, hard fact. Somebody has got to say it as it is and this writer makes absolutely no apology in disclosing this apparently depressing piece of news.Advertisement