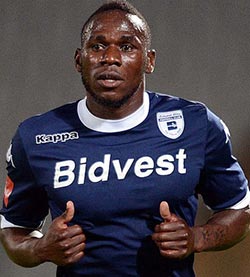 BIDVEST Wits defender Onismor Bhasera says he is impressed with how the game in South Africa has improved since his return from a four year stay in England.
Bhasera first spent almost five years at Maritzburg United and Kaizer Chiefs before he then moved to English club Plymouth Argyle before the 2010 World Cup but then decided to return at the beginning of the season to join Wits.
Since he came back the Zimbabwean has played regularly for The Clever Boys but has taken notice of the changes.
“The standard of the game has obviously improved from the last time that I played in the Premiership,” says Bhasera.
“I mean there have been huge developments in the game after the staging of the World Cup and the Afcon have been here. Everything has changed for the better and even on the field of play there are no easy matches anymore.
“Every match is now a big game now because all the teams are very organized which makes players get to have a strong mentality and be more committed,” says Bhasera.
Meanwhile, the Zimbabwe international is encouraging his team mates to keep grinding results ahead of Mamelodi Sundowns’ visit to the Bidvest Stadium on Saturday evening.
Bhasera is however suspended for that game after being sent off in the mid-week win over SuperSport United.
“We will just have to keep on grinding out results. We are happy with our progress so we will just have to take each and every match as it comes.
“What matters most for me is that we are working as a team and I am happy with the progress that we have made. For me it is less about the individual but more about the team achieving on its goals,” he says.