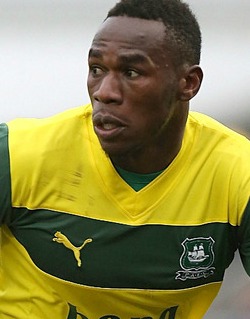 ENGLISH League Two side Plymouth Argyle’s boss John Sheridan is still awaiting a response from Onismor Bhasera over the club’s offer of a new deal to the Zimbabwe international.
Bhasera, Argyle’s player of the year, was initially given until last Monday to confirm whether he would be returning to Home Park for the 2013/14 League Two campaign.
Sheridan said: “The ball is in Baz’s (Bhasera) court at the moment.
“We’ve made him a very good offer and, hopefully, he will accept it, but it’s 50/50 over whether he will or not.”
The left-sided defender/midfielder (pictured right), who joined Plymouth from Kaizer Chiefs in 2010 when the Pilgrims were still a Championship club, and has gone on to make a total of 114 appearences for them.
The Warriors defender is said to be a target for Bristol City and Oxford United.
Sheridan, who is busily putting his own stamp on the make-up of next season’s Argyle squad, clearly rates Bhasera highly.
The former Chesterfield and Oldham Athletic chief has already re-recruited goalkeeper Jake Cole, defender Guy Branston, defender/midfielder Paul Wotton and midfielder Conor Hourihane and wants to add Bhasera to the list.
He however, said he was not surprised by speculation that Bhasera could be lured away from Home Park.
Sheridan said: “I’m not stupid. I knew there was going to be interest in Bas from other clubs. He has been on good money (at Argyle) but we have made him a good offer.
“Hopefully, he will think about it and come back to us. If not, we will have to fill that area of the squad.”
When asked whether he thought Bhasera would re-sign for the Pilgrims, Sheridan replied: “I don’t know. It’s probably 50-50.
“We haven’t heard anything from him but he’s a player I want to keep at the club.
“On the form he showed towards the end of last season, I think he’s the best left-back in the division, and he has played in the Championship.”
Argyle’s players are scheduled to return for pre-season training on June 26 and Sheridan is confident friendlies arranged with local non-league sides and home games with Championship newboys Yeovil Town and League One MK Dons are the right mix.Advertisement