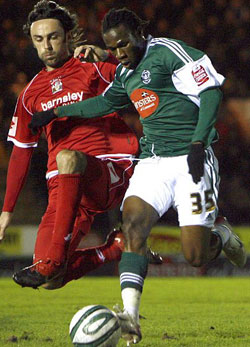 PLYMOUTH Argyle left back and Zimbabwe international, Onismor Bhasera, left for trials with Turkish Super league side Elazigspor on Wednesday.
The Turkish club which intends to hold its pre-season training session in Netherlands on July 10 was set to pick up Bhasera in England.
Bhasera’s agent Ralph Nkomo said the club wanted to have a closer look at him before making a decision.
Nkomo also said another English championship side had also shown interest for the Zimbabwean full back who can also play as a midfielder.
“He will be on trials with Elazigspor which is in the Turkish Premier League,” said Nkomo.
“The club will start its pre-season training on 10 July in Netherlands and they will pick up Bhasera in England. Elazigspor are looking for a left back and want to have a look at him since they don’t know how he plays.
“It’s unlike in England where he is well known. Bhasra was the best player for Plymouth Argyle in the past season but we are looking at what is best for the player. There is also an offer from another Championship division side in England.”
Nkomo added that Bhasera did not return to Plymouth Argyle after the off-season break because they were not happy with terms offered by the club.
He said nothing had changed as far as the terms were concerned since the club came out of administration and that everything they were looking at now should be in the best interests of the player.
However, Plymouth Argyle manager John Sheridan claims they had offered him a good deal.
“I’ve got to be looking at bringing someone else in now,” Sheridan told BBC Radio Devon.
“I’m not going to chase a player around the world when there’s one on the doorstep who can do a job for us.”
“We’ve made him a very good offer, we like him, the fans like him and he’s done well for us. The problem is getting hold of him and finding his whereabouts”
Bhasera, who made 114 appearances for the Pilgrims since joining from Kaizer Chiefs in 2010, had shown great potential to play at the highest level in the English premiership.
Should Bhasera make a breakthrough in Turkey, he will mix with some African stars at Elagizspor who include Guinea midfielder Pascal Feindouno, Senegal midfielder Tidiane Sane and Nigerian defender Chibuzor Okonkwo.Advertisement