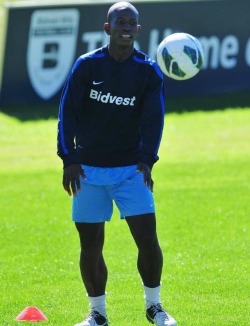 BIDVEST Wits defender Thomas Svesve, who was forced onto the side-lines last month by a knee injury, has told of the emotions he has been experiencing away from the football pitch.
The former Kaizer Chiefs and Zimbabwe national team defender says he is well on the path to recovery and hopes to return to action before the end of the year.
“It has been very frustrating for me to watch the rest of the team in action, but there is nothing much one can do in such a situation,” Svesve told KickOff.com.
“Still, I have been attending the matches and supporting the team whenever they have been playing.”
The defender, who recently underwent surgery on his knee, has been training separately with the club’s physiotherapist.
“The sessions with the physio have been going on well. It is very important not to rush the healing process, especially when you are recovering from a knee injury,” Svesve explained.
“I hope that in December I will be able to return to the field and hopefully make a meaningful contribution to the team.”
On the team’s performance in this year’s League title race, Svesve hopes the international break will rejuvenate the Clever Boys.
Wits currently lie seventh on the log standings with eight points after five matches.
“We must definitely be higher up on the log but this is a marathon. The international break has at least given us a chance to recharge our batteries and I am confident in the abilities of our coach,” he said.Advertisement