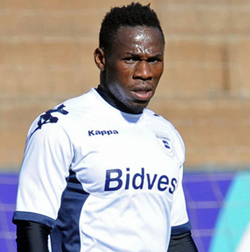 ONISMOR Bhasera is on the verge of signing for South African Premier League side Bidvest Wits after impressing during a training stint at the club.
The 27-year-old Zimbabwe international, who spent three years at English League 2 side Plymouth Argyle, has been training with Wits since the start of the month.
Wits coach Gavin Hunt, who has already signed former Zimbabwe captain Benjani Mwaruwari to the club, has expressed admiration for Bhasera who is available on a free transfer.
Hunt said Bhasera had been “excellent” in training and he could be the solution to their problems at left back following the departure of James Mayinga.
Bhasera will likely take up one of the foreign quota berths for the team which is still in the process of deciding how they will fill their limit of five foreign players.
“He’s been fantastic (at training). I’m signing him,” Hunt was quoted as saying by the football magazine, KickOff, on Monday.
Meanwhile, Mwaruwari has suffered an injury setback at the beginning of the new season. He was taken off at halftime of the goalless draw against Platinum Stars as the club began their new Absa Premiership season away on Sunday last week, and again missed Wits’ MTN8 quarter final clash with Bloemfontein Celtic last Friday due to a hamstring strain.
Scans taken after Mwaruwari was injured revealed no serious damage but enough to ensure he will be absent from Wits’ attack for the first few matches of the season.
The former Manchester City and Portsmouth striker, who signed after a brief spell with Chippa United last season, has been highly rated by coach Gavin Hunt and chosen to lead their attack this season despite the fact he is turning 35 next week.Advertisement