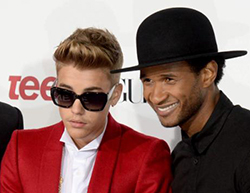 JUSTIN Bieber and Usher are being sued for $10m by two songwriters who claim they illegally copied parts of a song they composed.
R&B singer De Rico, real name Devin Copeland, and his songwriting partner Mareio Overton claim that three versions of Somebody To Love recorded by Bieber, Usher or both share the beat pattern, time signature and similar chords and lyrics with their song with the same name.
On Thursday last week, the US Circuit Court of Appeals in Richmond, Virginia, revived a May 2013 lawsuit, saying a lower court judge was wrong to dismiss it.
“After listening to the Copeland song and the Bieber and Usher songs as wholes, we conclude that their choruses are similar enough and also significant enough that a reasonable jury could find the songs intrinsically similar,” circuit judge Pamela Harris wrote for the appeals court.
Among the other defendants were publishers such as Vivendi SA’s Universal Music Publishing Group and Sony Corp’s Sony/ATV Music Publishing.
Defence lawyers have not commented on the case.
Duncan Byers, a lawyer for the claimants, in an interview said the panel “recognised what my clients have said all along: it’s the same melody and the same chorus”.
The lawsuit will return to the lower court.
One version of Somebody to Love, recorded by Bieber and credited to him as a co-writer, peaked at number 15 on the Billboard Hot 100 in 2010.
The plaintiffs alleged that music scouts had played their song, which was written in 2008, for Usher, who liked what he heard and then brought it to Bieber.
District judge Arenda Wright Allen dismissed the lawsuit in March 2014, saying no reasonable jury could find copyright infringement.
Harris, though, said even the lyric “somebody to love” was delivered in an “almost identical rhythm and a strikingly similar melody”.
Earlier this year Pharrell Williams and Robin Thicke were ordered to pay Marvin Gaye’s family millions after a jury ruled that their hit Blurred Lines infringed the copyright of Gaye’s Got To Give It Up.
Bieber: Somebody To Love Remix ft. Usher