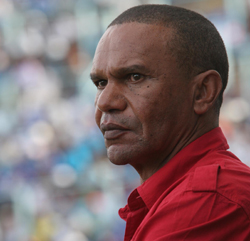 CHICKEN Inn will maintain spot at the top of the Castle Lager Premiership on Wednesday whatever the outcome of their tough match against Triangle at Gibbo.
The Bulawayo side opened a five point lead at the top of the standings when they beat ZPC Kariba 2-1 on Saturday while defending Dynamos slumped to a crushing 3-1 loss at the hands of FC Platinum at Mandava.
Platinum then moved into second place with 41 points, five off Chicken Inn’s 46.
But Wednesday’s match against Triangle at Gibbo provides yet another stern test for Joey Antipas’ men.
And the coach reckons they have to maintain a winning formula and avoid dropping points if they are to reach the Holy Grail for the first time in their short history in the PSL.
“Obviously we are the team to beat now and pressure is on us,” said Antipas.
“But I like the way the guys have been responding to the message that it has to be game-by-game, let’s not look too far ahead.
“Triangle is a tricky team; they are in the top four and they will be playing at home, so it’s really going to be a tough match for us.”
After this match, Chicken Inn will camp in Harare for their Chibuku Super Cup quarterfinal match against Chapungu at the National Sports Stadium over the weekend and return to Bulawayo next week to host Dynamos in a league match.
Platinum are away to struggling How Mine, who were stunned 2-1 by Tsholotsho on Sunday, and will be looking to bounce back to winning ways.
But Platinum are unbeaten in 13 league and cup matches and coach, Norman Mapeza, is praying for consistency.
“We just need to be a bit consistent and take it game by game, that lessens the pressure on the boys and I will repeat that we are not talking about the league title.
“That (league) title, we will see at the end of the season,” Mapeza said.
How Mine coach Luke Masomere has had the axe hanging over his head in the last three weeks and another loss at home will see him certain to be axed, just eight games before the end of the season.
On Sunday, veteran goalkeeper Munyaradzi Diya was beaten by Tsholotsho goalkeeper Naison Marichi direct from a goal-kick and is certain to be dropped for that howler.
But that depends on whether regular first choice Donovan Bernard arrives on time from Congo-Brazaville, where he was part of the Young Warriors team that took part in the 2015 Africa Games.Advertisement

If he does not, then third choice Notice Nonjabulo Dube might get his first match of the season.
FIXTURES
Wednesday: ZPC Kariba vs Harare City (Nyamhunga), How Mine vs FC Platinum (Luveve), Chapungu vs Tsholotsho (Ascot), Dynamos vs Whawha (Rufaro), Triangle vs Chicken Inn (Gibbo), Hwange vs Caps United (Colliery)
Thursday: Highlanders vs Flame Lily (Barbourfields), Buffaloes vs Dongo Sawmill (Sakubva)