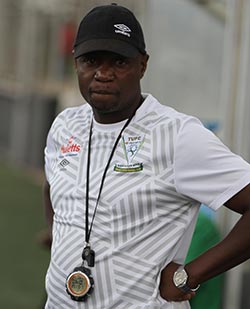 BIGGIE Zuze “Bindura” has snubbed Dynamos to rejoin Triangle as assistant coach to former Highlanders Zambian -Kelvin Kaindu.
The Lowveld side officially unveiled their technical team which also includes former ZPC Kariba goalkeepers’ coach Tembo Chuma.
“As it stands, the technical bench is as follows, head coach is Kelvin Kaindu, assistant coach is Biggie Zuze and we welcome Tembo Chuma who is the all-rounder goalkeeper’s coach,” said club vice chairman Martin Sibanda.
Zuze, who Dynamos claim had signed a contract with them as one of their assistant to head coach David Mandigora, was conspicuous by his absence at the Harare side’s first training session at the National Sports Stadium B arena on Monday amid reports he had been offered a lucrative deal at the Lowveld side which was difficult for him to resist.
The latest development means Mandigora will now have to do with the pair of Tonderai Ndiraya who is one of the assistant coaches and Gift Muzadzi who is the goalkeeper’s coach.
Zuze’s contract at Triangle had expired on December 31.
He joined Triangle at the start of last season as a replacement for Gishon Ntini who was booted out by the club leadership.
Zuze did not disappoint as he lifted the One Wallet Cup after beating Dynamos in the final.
But he faced challenges in his bid to save the team from relegation with the club eventually roping in Kaindu who helped the team survive the chop.Advertisement