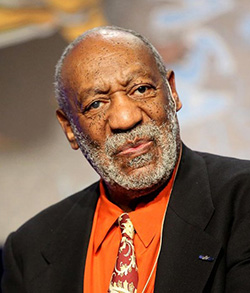 BILL Cosby said young people should separate what he has to say about their future from sexual assault allegations lodged against him.
The actor and comedian was in Alabama to speak with high school students as part of a nonprofit foundation’s campaign to improve education in the south-central part of the state.
In a taped interview with ABC’s “Good Morning America,” Cosby was asked how he would respond if a youngster pressed him about accusations that he drugged and sexually assaulted a number of women over a period of decades.
“I think many of them say, ‘Well, you’re a hypocrite. You say one thing, you say the other,'” he replied. “My point is, ‘OK, listen to me carefully. I’m telling you where the road is out. You want to go here or you want to be concerned about who is giving you the message?'”
Cosby, 77, who has never been criminally charged, didn’t address assault claims made by more than 25 women and has largely maintained his silence since the allegations resurfaced starting last year. He faces two pending suits.
“I have been in this business 52 years. … I’ve never seen anything like this. And reality is the situation,” he said, adding, “and I can’t speak.”
He volunteered his time to bring exposure to area schools, Black Belt Community Foundation President Felecia Lucky has said. He met students at Selma High School on Friday before marching with them across the historic Edmund Pettus Bridge.
The bridge was the setting for Bloody Sunday in 1965, where police beat peaceful demonstrators marching in favor of voting rights. Cosby spoke to students on the importance of education and understanding the city’s role in civil rights history. The Selma Times-Journal reported that Cosby initially had concerns about making the appearance.
“They wanted to know if I would come and I said ‘Look, you’ve got to think about this situation that I’m embroiled in. That may not be cool,'” the newspaper quoted him as saying.
“I said I really don’t want people to get into trouble and start arguing and fighting over me when the children are very, very important.”
Sitting with Cosby during the ABC interview, Lucky defended the decision to trade on his fame despite the allegations.
“At the end of the day, what is most important is … how do we make sure that the world knows that the Black Belt children matter,” Lucky said. The region is named for its fertile black soil but is stifled by low income and high unemployment.Advertisement

Cosby was asked if he was concerned about his legacy and what he’d like it to be.
“I really know about what I’m going to do tomorrow. I have a ton of ideas to put on television about people and their love for each other,” he said.
Shortly after the scandal broke last year, NBC decided not to move forward with a planned Cosby sitcom.
The star of the influential and popular 1980s family comedy “The Cosby Show,” he has long weighed in on the issues of education and personal responsibility in the African-American community.
He and his wife, Camille, have donated millions of dollars in gifts to colleges and hundreds of thousands more for scholarship grants through the couple’s foundation.