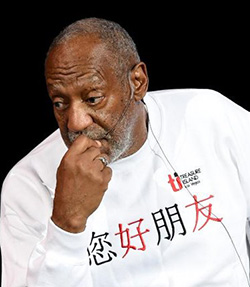 BILL Cosby will not respond to “decade-old, discredited” allegations of sexual abuse, his lawyer said Sunday, following recent claims that the beloved US entertainer had assaulted a string of women over the years.
Cosby made headlines on Saturday when he shook his head in silence when asked if he wanted to address allegations of rape and sexual abuse made against him in recent weeks during an interview on National Public Radio.
In a statement on the veteran comedian’s website on Sunday, lawyer John P. Schmitt said Cosby would make no comment on the wave of claims against him.
“Over the last several weeks, decade-old, discredited allegations against Mr. Cosby have resurfaced,” the statement said.
“The fact that they are being repeated does not make them true. Mr. Cosby does not intend to dignify these allegations with any comment.
“He would like to thank all his fans for the outpouring of support and assure them that, at age 77, he is doing his best work. There will be no further statement from Mr. Cosby or any of his representatives.”
Cosby, most famous for playing the patriarch of a middle-class, African-American family in NBC television’s long-running sitcom “The Cosby Show” between 1984 and 1992, has been at the centre of a storm since comedian Hannibal Buress branded him a “rapist” during a stand-up show in Philadelphia last month.
A scheduled appearance by Cosby on the “Late Show with David Letterman” was mysteriously cancelled as the entertainer faced a barrage of accusations.
The Washington Post last week published a detailed account by actress Barbara Bowman of alleged abuse she suffered at the hands of Cosby when she was a starry-eyed teenager in 1985.
Bowman insisted she had neither sought nor received money from Cosby. She had offered to testify in a civil action brought by a woman who accused Cosby of sexually assaulting her, which was eventually settled in 2006.
A total of 13 women who made similar accusations against Cosby had also offered to testify in the case, according to US reports.Advertisement